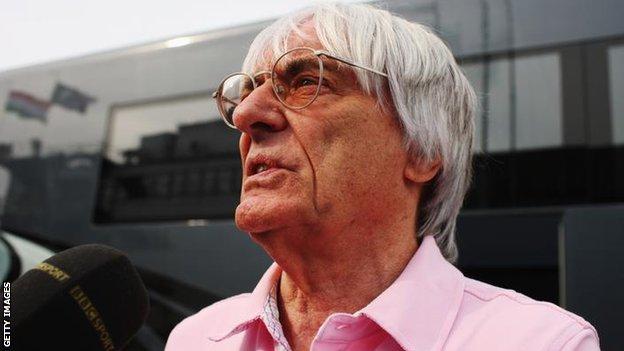 Formula 1 boss Bernie Ecclestone says he has no doubts about holding the Bahrain Grand Prix this year.

The race was cancelled last year due to civil unrest and human rights groups have called for the race to be axed.

Asked by BBC Sport if he had concerns about safety in Bahrain for himself and the teams, Ecclestone said: "Not at all. It's business as usual.

The FIA have come out this week and said they have sent a huge delegation to Bahrain and it is completely safe.

We've had reassurances from the organisers and the government out there.

Bernie confirms beyond any doubt that he is totally satisfied this race is going to take place.

If there's a grand prix there I'll be there. I feel safety is not an issue at all.

"I don't need any personal security but I'm sure whatever's necessary will be looked after."

Ecclestone's remarks come a day after the president of Bahrain's Automobile Federation, Sheikh Abdullah bin Isa Al Khalifa, said he did not believe security needed to be stepped up.

Al Khalifa said he was "not worried at all" about the safety of those attending the race, while governing body the FIA expect the race to go ahead.

A FIA spokesman said: "We welcome the spirit of reconciliation expressed by all parties and look forward to an exciting F1 race at the Bahrain International Circuit."

A BBC statement said: "If the race is officially sanctioned by the FIA we would expect to cover the event as part of our contractual obligations.

"We take staff safety very seriously and remain in regular communication with the FIA and will be monitoring the situation closely."

Ecclestone was attending a lunch held in London by the race organisers, which was also attended by leading figures from the Red Bull, Williams, McLaren and Mercedes teams and the motorsport chief of tyre supplier Pirelli.

The Bahrain Grand Prix is due to be held on 22 April as the fourth round of the championship.

There are concerns that it could be a target for protesters as it is so closely tied to the Bahrain ruling family.

Nabeel Rajab, president of the Bahrain Centre for Human Rights, told the BBC's HardTalk programme on Wednesday that the race should not be allowed to go ahead in the country because of Bahrain's human rights record.

Rajab told BBC HARDtalk's Stephen Sackur: "It should stop, at least out of respect for the Formula 1 staff."

But Ecclestone said: "It's business as usual. I don't think the people who are trying to demonstrate a little bit are going to use anything to do with F1. If they did they would be a little bit silly."

He blamed the media for enflaming the situation, saying: "The problem is people like you who make the concerns not the teams and not the people in Bahrain.

"Seriously, the press should just be quiet and deal with the facts rather than make up stories."

The race has been presented by the Bahraini authorities as a chance to heal the wounds created by the violent suppression of protesters last year.

The ruling family has since responded to a heavily critical independent report of the authorities' actions during the clampdown by offering reform.

But pockets of resistance protesters continue to be involved in almost daily clashes with police in the Gulf state.

Asked whether F1 could facilitate reconciliation in Bahrain, Ecclestone said: "I don't see we can help much.

"The good thing about Bahrain is it seems more democratic there than most places. People are allowed to speak when they want, they can protest if they want to."

Red Bull team principal Christian Horner said: "F1 is a sport at the end of the day.

"We have always enjoyed racing in Bahrain, it's on the calendar, the FIA and the promoters deem it right that we hold a race in Bahrain and we'll be happy to be there and race."

Asked if he had had any assurances about the safety of his staff, Horner said: "That's more of an issue for the governing body; they put the calendar together.

"We've had assurances that they're happy. When you enter the world championship you enter all the races and we'll look forward to racing in Bahrain."