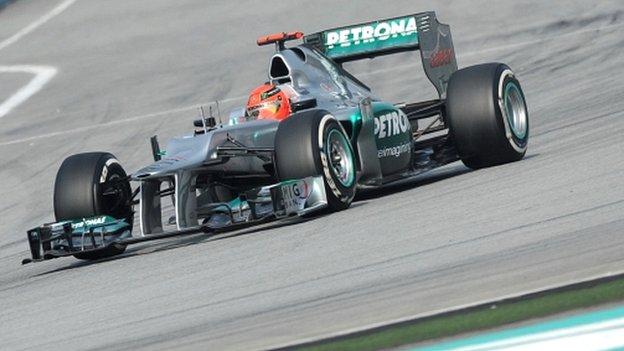 Formula 1's governing body the FIA is this week reassessing its position on the legality of a controversial design feature on the Mercedes car.

The move comes in the wake of continuing complaints from rivals about the system. BBC Sport understands at least five teams consider it illegal.

Mercedes built the system after an all-clear from the FIA.

Rivals - who estimate the system is worth as much as 0.5 seconds a lap in qualifying - have been lobbying FIA race director Charlie Whiting about the system since before the first race of the season in Australia last month.

Lotus and Red Bull were the two teams leading objections to the design, which Whiting indicated he felt was legal in both Australia and at the Malaysian race a week later.

But teams have continued to lobby Whiting since returning from Malaysia last week and BBC Sport understands he will look in detail at their arguments this week before trying to come to a definitive position on the issue.

If Whiting again rules it legal, it remains possible that rivals will protest against the system at the next race in China on 13-15 April.

Mercedes drivers Nico Rosberg and Michael Schumacher have accrued little advantage from the system so far in terms of race results, scoring only a single point between them from two races.

The ingenious system works by combining the DRS flap on the rear wing with the front wing.

Use of DRS - which stands for drag-reduction system - is free in practice and qualifying but in a race, drivers can use it only in designated zones when less than a second behind the car in front.

When the DRS flap lifts to give the driver the requisite straight-line speed boost, it reveals holes on the inside of the rear-wing endplate.

These holes connect up through channels inside the car to slot gaps on the underside of the front wing, which sucks air from the rear wing, reducing the front wing's effectiveness.

We call it the DRS, because that's all it is. The purpose of the DRS is to improve overtaking and that's what we're trying to do

It has a number of benefits, including increased straight-line speed and better stability through certain fast corners and - some engineers say - a reduced front ride height, which aids aerodynamics.

Rivals believe it is illegal because the system is driver-operated - and article 3.15 of the technical regulations states that with the exception of DRS, "any car system, device or procedure which uses driver involvement as a means of altering the aerodynamic characteristics of the car is prohibited".

Mercedes argue that as the system is part of the DRS it complies with the rules as it falls within the exemption.

Team principal Ross Brawn said at the Malaysian Grand Prix: "We call it the DRS, because that's all it is. The purpose of the DRS is to improve overtaking and that's what we're trying to do."

Rivals counter that the rule that defines the DRS system - article 3.18 - mentions only the upper flap on the rear wing and nothing else, and that therefore the front wing falls outside its boundaries and cannot be considered part of the DRS.

Brawn says that every team's DRS system is designed to affect other parts at the rear of the car - such as the lower rear wing, endplates and diffuser - and that Mercedes' approach is merely an extension of that.