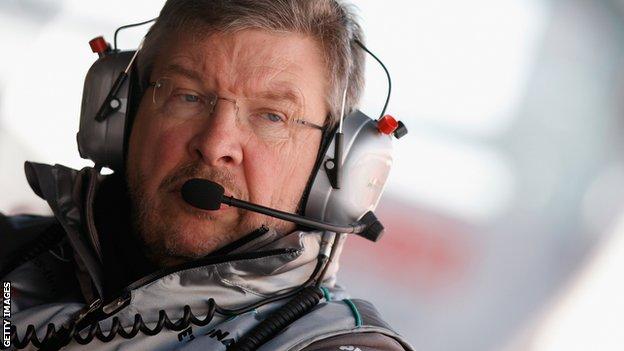 Mercedes say they will retain the advantage of a controversial design on their car for some time to come because it is difficult to copy.

Rivals have questioned the legality of a system that links the DRS rear wing overtaking aid with the front wing, boosting straight-line speed.

It had been thought that rivals could copy the system by the fifth race of the season.

But Mercedes boss Ross Brawn said: "The opposition is so fierce [because] there's a recognition it's quite difficult to do."

Brawn explained that while the technology is simple in operation, it is hard to integrate it into a car that was not designed from scratch with the system in mind.

Mercedes have cut holes onto the inside of the vertical endplates of the rear wing which are revealed when the driver pushes a button to operate the DRS, which lifts the flap on the rear wing.

Mercedes have qualified third and fourth (Michael Schumacher) and seventh and eighth (Nico Rosberg) for both races so far this season, but scored only one point for Schumacher's 10th place in Malaysia. They are ninth in the constructors' championship - ahead only of the three teams that were new to F1 in 2010

Use of the DRS - which stands for 'drag-reduction system' - is free in practice and qualifying, but in the race drivers can use it only in designated zones when less than a second behind the car in front.

The holes in the Mercedes rear-wing endplates connect up through channels inside the car to slot-gaps on the underside of the front wing, which sucks air from the rear wing, reducing the front wing's effectiveness.

The system has a number of benefits, including increased straight-line speed and better stability through certain fast corners and - some engineers say - a reduced front ride height, which aids aerodynamics.

Some rivals estimate the system could be worth as much as 0.5 seconds a lap.

Brawn said: "It's a very simple, cheap system, but not so easy to implement if you haven't integrated it into your car.

"This is at the heart of the frustration of some of our opponents.

"People talk about the huge cost, but there is no huge cost. There's a couple of carbon pipes running down the car.

"The man in the street would tell you they are a few thousand pounds, they're not millions of pounds.

"But the benefit we've gained is because we've thought about it and designed it into the car, and that's not so easy for the people who haven't got it.

"It's one of the few things in F1 that is quite innovative without a cost element.

"If someone could put it on their car easily, I promise you we wouldn't be having these discussions. But they can't do it very easily, which is why they're getting so vexed about it."

Lotus and world champions Red Bull are the teams who have been most vocal in opposing the system, but BBC Sport understands at least three other teams also consider it to be illegal.

Charlie Whiting, the race director of governing body the FIA, is this week re-assessing the system's legality after further representations from Mercedes' rivals.

Mercedes embarked on the system after checking its legality with the FIA, and Brawn said: "We are confident the system is legal.

"As far back as 2010, the FIA were stating they considered such a system legal.

"We would obviously be extremely disappointed if someone was to take a different view.

"The FIA have been fairly consistent over their position so we have faith that they'll maintain that consistency."

Mercedes have qualified well in the first two races of the season - with Michael Schumacher taking fourth and third places on the grid in Australia and Malaysia.

But he and team-mate Nico Rosberg have slipped backwards in the races.

Brawn insists this is nothing to do with the DRS boost system flattering their car in qualifying, before it falls back to a more natural level in the race, when the system cannot be used as much.

Instead, Brawn says the team have been struggling to use their tyres properly - they ran too hot in Australia and then too cold in Malaysia.

"If they're 15 degrees either side of where you want them to be, it's very difficult to get them back," Brawn said.

"They almost run away from you. You have to keep them within that range. If you keep them there, they're OK. But if they start to get away from you it's hard to control them."

He said the team were working on ways of giving them an wider operating window with the tyres.