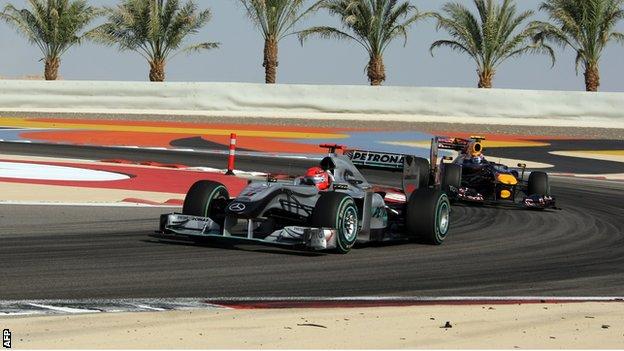 A number of Formula 1 teams expect the Bahrain Grand Prix to be called off amid security concerns caused by civil unrest, BBC Sport has learned.

F1 boss Bernie Ecclestone says no teams have expressed concerns to him.

A statement from the Formula One Teams' Association on Tuesday said it was down to the FIA to cancel the race.

Teams will meet Ecclestone at the weekend when a decision is expected. However authorities remain confident the race will go ahead.

Bahrain has a contract to 2016 but the rules state that any race that has to be cancelled two years on the trot cannot be put back on the calendar the following year unless there is an argument for force majeure. But the unrest in Bahrain has been ongoing since February 2011, so it would be difficult to make that case. As Bahrain is one of F1's most lucrative races, it's not hard to understand the reluctance to call it off, despite many believing the sport has no choice given the situation in the Gulf state.

Violence between protesters and security forces erupted again on Bahrain's streets earlier this year after unrest during the 2011 Arab Spring led to last year's Bahrain GP being cancelled.

Unlike last year, the Bahrain authorities are in no mood to cancel the race themselves, so the decision rests with the FIA this time.

Bahrain's majority Shia population have been demanding democratic reforms from the country's Sunni rulers, and the government has tried to quell their protests.

The Bahrain race organisers argued last week that holding the GP would have an important unifying role in the country and Ecclestone has said he has no doubts about staging the race, scheduled for 22 April.

Hill had originally backed the race after visiting the country on a fact-finding mission with motorsport boss Jean Todt in December.

But another British former world champion, Sir Jackie Stewart, believes the race should go ahead. He told BBC Sport: "It is a dangerous precedent to set [if] we don't go to Bahrain.

"In reality, a specialist of the Middle East would say Bahrain is more developed than any other Middle East state. However, they have a problem."