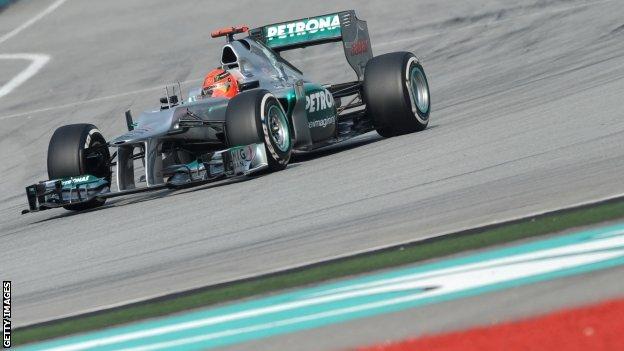 Lotus's protest against a controversial rear wing design on the Mercedes car has been rejected by race stewards.

Lotus argued the device, which combines the DRS overtaking aid with the front wing, broke the rules by being a driver-operated aerodynamic device.

The Enstone-based team will not appeal against the decision and rivals must now decide whether to copy the design.

Mercedes team boss Ross Brawn says the device does not give as much of an advantage as some rivals had claimed.

Brawn said: "Obviously there's benefits in the system, but Lotus were quoting they have a 0.2secs benefit (from new parts) coming here. Well, I can promise you our system is definitely not 0.2secs, particularly in the race.

"You get to use it whenever you overtake. So the amount of effort and time that's gone into it seems disproportionate."

The system can only be used when the DRS is in operation.

Use of the DRS is free in practice and qualifying but in the race it can only be deployed when a driver is in designated zones on the track and if he is within a second of the car in front.

Mercedes have connected up the DRS so that the system 'stalls' both wings rather than just the back one, giving an extra reduction in drag.

The team have cut holes onto the inside of the vertical endplates of the rear wing which are revealed when the driver pushes a button to operate the DRS, which lifts the flap on the rear wing.

The holes in the Mercedes rear-wing endplates connect up through channels inside the car to slot gaps on the underside of the front wing, which sucks air from the rear wing, reducing the front wing's effectiveness.

The system has a number of benefits, including increased straight-line speed and better stability through certain fast corners and - some engineers say - a reduced front ride height, which aids aerodynamics.

Lotus argued - in a view shared by the majority of the teams - that the device breaks articles 3.15 and 3.18 of the technical regulations.

It's a very simple, cheap system, but not so easy to implement if you haven't integrated it into your car

Article 3.15 prohibits driver movement altering the aerodynamic characteristics of the car but excludes the operation of what it calls the parts detailed in article 3.18 - which defines the DRS.

As article 3.18 mentions only the parts of the rear wing, which moves to reduce drag when the driver presses a button in the cockpit, Lotus believe the Mercedes system is illegal.

But the stewards saw it differently, pointing out "the sole purpose of the 'DRS (or the 'system' as referred to in the regulations) as stated in article 3.18.3, is to improve overtaking. The Mercedes design is completely consistent with this objective."

Brawn said last week that the reason rivals were so exercised about the system was that it was difficult to fit on to a car that had not been designed with it in mind.

"It's a very simple, cheap system, but not so easy to implement if you haven't integrated it into your car," said Brawn.

"This is at the heart of some of the frustration of some of our opponents.

"People talk about the huge cost but there is no huge cost. There's a couple of carbon pipes running down the car.

"The man in the street would tell you they are a few thousand pounds, they're not millions of pounds.

"But the benefit we've gained is because we've thought about it and designed it into the car and that's not so easy for the people who haven't got it.

"It's one of the few things in F1 that is quite innovative without a cost element.

"If someone could put it on their car easily, I promise you we wouldn't be having these discussions. But they can't do it very easily which is why they're getting so vexed about it."