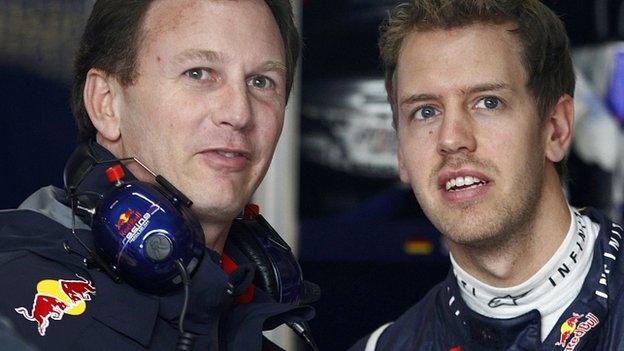 Red Bull principal Christian Horner says his team will have extra security for the Bahrain Grand Prix, which takes place next week.

Civil unrest in Bahrain and threats to target the race by anti-government protesters have increased concerns ahead of the fourth race of the season.

On Friday, Formula 1's governing body, the FIA, confirmed the race will go ahead on 22 April.

"We take the security of all our employees very carefully," said Horner.

"Inevitably, as with other races, sometimes extra precautions are taken.

"We'll do our best to ensure that all our guys and girls are in a secure environment."

Protesters in Bahrain have called for the race to be cancelled. The ruling royal family is being pressured to improve human rights and make reforms by the majority Shia population, who accuse the minority ruling Sunnis of discrimination.

Pressure has built in recent weeks as riots have continued in Shia neighbourhoods.

An explosion, apparently caused by a gas canister, damaged two cars in Manama on Thursday, while seven policemen were wounded by a homemade bomb outside the capital on Monday.

However, Formula 1 teams are already used to extra security at some races, notably in Brazil, where armed robbery away from the Sao Paulo racetrack is a concern.

Horner added: "There are other races that we go to that have risks associated with them and it is down to each team how you address that. So next weekend will be no different."

Lotus team principal Eric Boullier said his team were happy to go to Bahrain. "The decision is done and the race is on the calendar. We will just make sure that safety is respected for all our people, and we can work in normal conditions.

"We believe it will be a normal weekend. We're happy to go there."