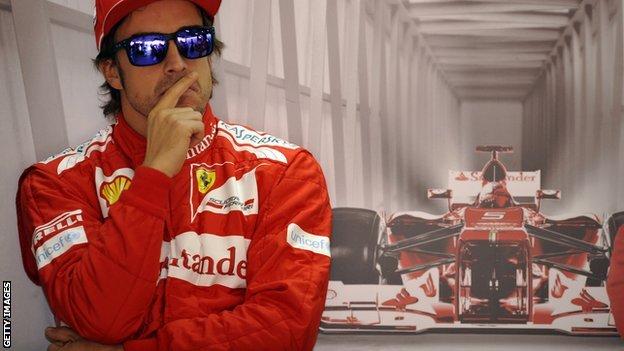 Fernando Alonso insisted he still had a chance of winning his third world championship this year despite Ferrari's continuing poor form.

The Spaniard is leading the title chase after a surprise win in Malaysia three weeks ago, but the car is a second off the pace in normal conditions.

When it was suggested this margin was impossible to make up, he said: "The title is Ferrari's target every year.

"But obviously we are not stupid, we know we are quite far behind."

Alonso has qualified ninth for this weekend's Chinese Grand Prix, after lining up 12th and eighth for the two previous races in Australia and Malaysia.

His renowned fighting spirit and relentlessness earned him a fifth place in Melbourne and a stunning victory at Sepang, but he has admitted he is likely to lose the world championship lead in Shanghai on Sunday.

He said: "One second is a lot of gap to recover but the car has some big problems in terms of aerodynamics, which gives us the possibility of optimism inside the team that we can recover maybe not one second, but a lot of time if we put a couple of things that are maybe not working in the right place.

"This is the first priority, what is not working now, try to make it work and when we are happy with the car we will see what is the gap exactly.

"At the moment it is too big because the car is not working."

The team have a major upgrade to their car planned for next month's Spanish Grand Prix, which they hope will produce a marked upturn in form.

Fernando Alonso's win in Malaysia was the 28th of his career. Only Michael Schumacher (91), Alain Prost (51), Ayrton Senna (41) and Nigel Mansell (31) have won more

This is centred on a change in rear bodywork design to make better use of the exhausts to bring an aerodynamic benefit, an area Ferrari have struggled in since their original design had to be abandoned following the first pre-season test when it was discovered to be overheating the rear tyres.

The Ferrari is usually more competitive in the race than in qualifying, but Alonso said it would be difficult to move up the field into a strong points-scoring position.

"In the race normally we improve the pace," he said, "but it's true that behind us on the grid today there are people quicker than us, like [Lotus driver Romain] Grosjean or [Red Bull's Sebastian] Vettel.

"Even if we try to overtake people at the front we know people from behind will be quicker than us."