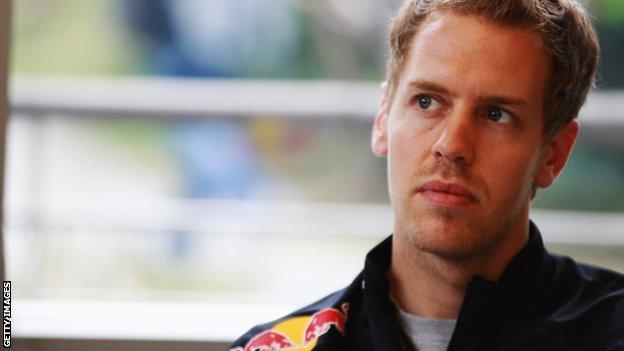 Red Bull won 12 out of 19 races in 2011 and took 18 pole positions, as Vettel and the team wrapped up their second world titles in as many seasons.

But in 2012, it took until the fourth race in Bahrain last weekend for Red Bull to win a race, courtesy of Vettel.

"It is tight and we're not as confident as we used to be," said Vettel.

I'm not entirely happy with where we are, but I think there's great potential in the car

"So small things can make a difference in qualifying and have a big impact on the race."

This season has seen a wild fluctuation in performance with four different winners, racing for four different constructors - the first time this has happened since 1983.

As a result, the championship is wide open, and Red Bull were in the unfamiliar role of playing catch up early on.

However, after three races with only a solitary podium, Red Bull found the sweet spot with their set-up and the Pirelli tyres in the Bahraini desert to end their barren run.

"This year we'd have loved to be in a better place to start," added Vettel. "Nevertheless, I think we've had good races.

"I'm not entirely happy with where we are, but I think there's great potential in the car.

"You have to give yourself time to try different things and see what works best for you."

The teams will spend some time in the factory before heading to Mugello in Italy - the first in-season test since 2008 - for three days of running.

"In Italy we'll be able to test and evaluate a lot of things and get the car in a happier place [for the Spanish Grand Prix on 13 May]," added Vettel.