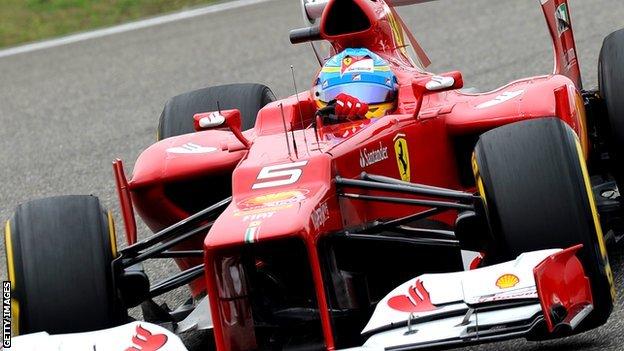 Ferrari head into a major Formula 1 test this week knowing it could make or break their season.

Fernando Alonso has won one of the first four races, but Ferrari have been uncompetitive and will try out new parts they hope will improve their car.

Team boss Stefano Domenicali said it was "clear that we must step up a gear, right from the next race".

"The coming days will be important. The main objective is to push hard on the development of the car."

The test, at Ferrari's Mugello test track in Italy, will feature 11 of the 12 teams - struggling HRT have stayed away to concentrate on the relocation of their factory to Madrid.

Alonso lies fifth in the championship after the first four races of the season - thanks largely to an unexpected victory in the mixed conditions in Malaysia.

The car's overall performance has not been up to Ferrari's usual standards - the Spaniard has not qualified higher than ninth and he finished the other three races in fifth, ninth and seventh places.

Alonso said: "[In] four races, we lost 10 points from the leader of the championship. This is damage limitation big time with our package at the moment.

"But we need to improve, we are in this position thanks to the mixed results we see every weekend - this is helping us.

"But what really matters for us is to improve the package and not depend on results of others. We need to do our proper job, which at the moment we are not doing."

Ferrari have a package of performance upgrades which they hope will leapfrog them up the grid starting from the next race, the Spanish Grand Prix on 13-15 May.

The most visible of these is expected to be a major change to the rear bodywork in an attempt to improve the car's aerodynamics.

Ferrari are believed to be planning to change the shape of the back of the car to one that is similar to that used by Sauber and Red Bull.

If this proves to be the case, the big modification is to remove the large parts of bodywork that stick out towards the rear wheels and to make the back of the car much more tightly waisted.

Part of the design used by Red Bull and Sauber is to place the exhaust exits so the gases combine with the airflow over the car and improve the aerodynamics around the rear wheels and floor.

What really matters for us is to improve the package and not depend on results of others. We need to do our proper job, which at the moment we are not doing

Ferrari will run in Mugello only some of the planned upgrades they are bringing for the Spanish race - and then not from the start of the test.

Some of the new parts will appear only in Barcelona as Ferrari wanted to give their engineers as much time as possible to develop them before manufacturing them to go on to the car.

The new rear bodywork will be trialled, however.

The test runs from 1-3 May. Alonso will drive on Tuesday and Thursday, with team-mate Felipe Massa driving on Wednesday.

It is the first test to take place during the season since 2008, after which in-season testing was banned on cost grounds.

This year, the teams decided to forego one of their four pre-season tests and move it to May - to help them plan for the start of the 'European season' following the four long-haul races at the start of the year.

Most teams will have race drivers in attendance for at least some of the time.

But McLaren, who have questioned the usefulness of the test, will only use test drivers Gary Paffett and Oliver Turvey.