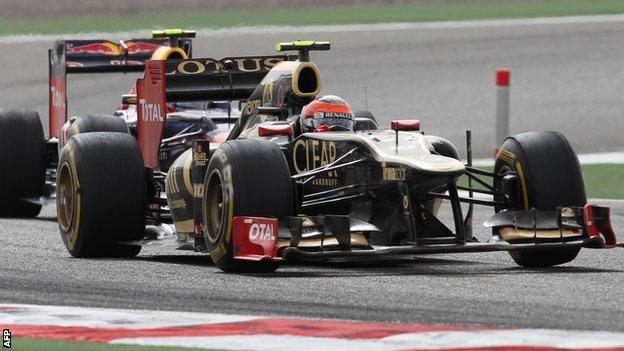 Both recorded a best lap of one minute 21.603 seconds, to head Red Bull's Sebastian Vettel and Mark Webber.

They were the only drivers to dip below one minute 22 seconds, with Ferrari's Felipe Massa fifth fastest.

For no team is the test more crucial than Ferrari, who are trying to raise their competitiveness after a disappointing start to the season.

Wednesday was dry after the first day of testing on Tuesday was effectively a wash-out because of heavy rain.

Massa took over the car from Fernando Alonso, who said he had managed to complete some useful work despite only managing about 10 laps on a dry track.

The Spaniard was trialling different positions of exhaust exits as Ferrari seek to exploit potential aerodynamic gains of blowing gases in different directions.

BBC F1 technical analyst Gary Anderson said: "The teams were trying out bits and bobs here and there, and a lot were running with air sensors of one kind or another to assess whether the airflow was doing what they want it to do in important areas of the car.

"Ferrari have tried two different positions of exhaust exit here - the one they have been racing with and the one they had to abandon during pre-season testing because it was overheating the rear tyres.

"They believe the pre-season testing one is the best, and they have been doing more work on that here.

"Ferrari will have some other new parts in Mugello on Thursday but I'm told the major rear bodywork change that had been expected may now not emerge until the Spanish Grand Prix weekend."

Eleven of the 12 teams are attending the test, with struggling HRT choosing to stay in Spain and complete their factory move to Madrid.

McLaren are the only team not to use their race drivers. Lewis Hamilton and Jenson Button have been told they do not need to be there and the team are using test drivers Gary Paffett and Oliver Turvey instead.