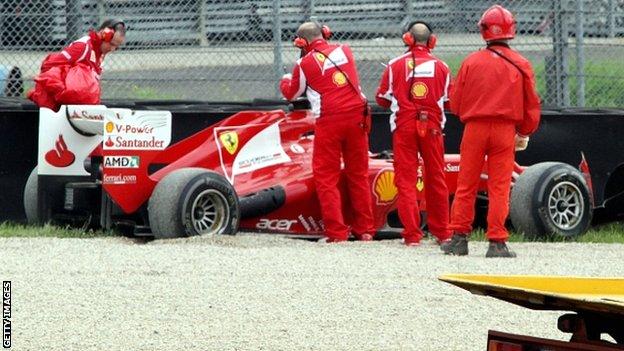 This weekend's Spanish Grand Prix is critical for Ferrari.

It should offer a good indication of whether Fernando Alonso will be a genuine title contender this year or whether he will be forced to spend another frustrating year in an uncompetitive car.

The first four races of the season have been, as Alonso himself has put it, "damage limitation" for Ferrari.

The F2012 car has been uncompetitive and Alonso has done tremendously well to lose only 10 points to championship leader Sebastian Vettel of Red Bull.

But he and Ferrari know he cannot compete for the title like that and the team are bringing to Barcelona's Circuit de Catalunya this weekend a raft of new parts they hope will improve the car's performance.

Some of these, including revised rear bodywork and rear wing, were tried out at last week's test at Mugello in Italy. Others will be new for this weekend - expected to be a new front wing and diffuser.

If these do not make a significant difference to Ferrari's performance, Alonso will probably have to write off this season in terms of the championship just as he did in 2011.

The latest updates do at least suggest Ferrari are getting a grip on where the problems with the car originate.

Let's look at the problems in detail.

The front wing is the most important single aerodynamic part of any F1 car - as it is the first part to hit the air, it defines to a large extent the airflow over the rest of the car.

Design is a compromise between two areas - the horizontal wing chord itself and the endplates, the vertical parts on either end.

In theory, the wider the chord, the more downforce the wing creates. But teams also have to take into account the sensitivity of the wing to changes in airflow, and the effect the endplates have on directing the air around the front wheels.

The wheels create a huge aerodynamic blockage and the endplates need to have a significant degree of curvature to them to persuade the air to go around the front of the car.

So the design of a wing is a compromise between these two main areas - and a lot of other smaller factors we'll leave to one side for now.

In my opinion, Ferrari's front-wing endplates are not working the air hard enough to get it around that front wheel - they look years behind those used by Sauber, for example, in terms of sophistication.

One area where there has clearly been a problem on the Ferrari is the rear bodywork - and it is something they have tried to address with their latest upgrade.

The new design tried in Mugello reduces significantly, although not entirely, the amount of bodywork in the "coke-bottle" area. Ferrari have also abandoned trying to work the exhausts for aerodynamic effect.

That is a step in the right direction. That one change alone could gain them 0.2 seconds a lap, and maybe more.

The "coke-bottle" is the area between and immediately forward of the rear wheels, where the bodywork sweeps inwards towards the centre line of the car.

Previously, the Ferrari had more rear bodywork sticking out into that space than any other car.

Designers use a "coke-bottle" shape to move the airflow inside the rear wheel, to reduce the drag the wheels inherently create, and counterbalance the lift created by the top of the sidepods.

Getting the airflow nice and fast through this area gives other benefits, too, helping both the diffuser and the rear wing. So most teams keep it as clean and tight as possible.

Ferrari's reason for having that bodywork there was to try to get the exhaust gases to improve airflow over the floor.

All the teams are trying to do this - they want to recapture at least some of the aerodynamic downforce they have lost this year from the banning of exhaust-blown diffusers, where teams routed exhaust gases along the floor of the car even when the driver was off the throttle.

That is not allowed anymore and the exhaust exits need to be within an area defined by the rules. Any gains you can get from directing the exhausts at specific areas of the floor are down to about 10% of what was available last year.

Nevertheless, as Red Bull, Sauber and McLaren are showing, there are other ways of doing this that are almost certainly more effective in terms of the overall design of the car.

I believe Ferrari were chasing a small gain while creating a bigger deficit in the disruption to the "coke-bottle" airflow.

Not only did the bodywork affect the airflow there detrimentally, that problem was exacerbated because they are also using the rear of the sidepod as a radiator-air exit.

Radiator air is hot and slow - exactly what you don't need somewhere you want fast airflow.

The new bodywork also features radiator outlets near the exhaust exit, when I think in an ideal world you'd use the back of the engine cover for that, as Red Bull did last year.

To understand how the radiators are situated in most F1 cars, imagine a mattress on your bed and then lift the front so it is leaning at about a 30-degree angle. That's what the radiators look like in the sidepods.

Ferrari, though, have mounted their radiators on their sides, with the rearward part closest to the chassis and angled outwards towards the front of the car, an approach most teams abandoned years ago.

Ferrari will have done that for packaging-related reasons, possibly related to the fact they have shorter sidepods than other teams.

But it means the radiator has to use a thicker core, which means the cooling is less efficient and so is the airflow through it.

One of the most novel features of the Ferrari is that it uses pull-rod front suspension.

This is where the suspension system runs from the top of the wheel assembly to the rocker mounted in the bottom of the chassis - the other way around from the push-rod system used by every other team.

In theory, pull-rod suspension creates a small advantage in both aerodynamics and centre of gravity.

But I think that is counter-balanced by compromises in the system that mean, at best, there is no advantage and, at worst, it could be hurting Ferrari in certain circumstances.

That's not making or breaking the car, though.

The front suspension geometry is also a little strange - the car never looks like it uses the whole tyre-contact patch.

All F1 cars are set up with negative camber on the front wheels - the tops lean in towards the car as you look at it from head on. This is to cope with the tyre deflection as the car goes around high-speed corners, giving the maximum tyre contact patch to get best grip.

But the Ferrari appears to roll off too much camber as it corners - the tyre goes too far the other way.

To fix that, you put on more negative camber, but that means that there is less rubber in contact with the track during braking, which reduces braking efficiency. It can also overheat the inside shoulder of the tyre on the straights.