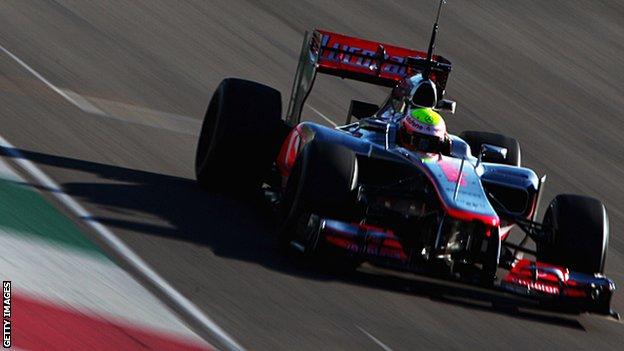 McLaren expect to recover their form at the Spanish Grand Prix after failing to finish on the podium in Bahrain.

Team boss Martin Whitmarsh said that the team had struggled with tyre usage in the last race in Bahrain, but thought there was a "positive feeling" in the team ahead of this weekend.

He said: "The great thing about this sport is you can never be fully confident you understand everything.

"We have a great car and inherently the pace is there."

There have been four different winners in the first four races this season, and McLaren drivers Lewis Hamilton and Jenson Button lie second and fourth in the championship, four and 10 points behind

"Pirelli are in a very difficult position. If they produce tyres that are a real challenge, and if the driver has not had a good race, he is going to understandably complain.

"But on the other hand if they make tyres that are very robust and not challenging in terms of management from either the team's or the driver's perspective, then I'm sure the spectators will be critical of those tyres because they haven't created the right spectacle."

Whitmarsh added the signs were that the "unpredictability" of the season meant F1 was in for "an exciting championship" and he expected Hamilton and Button to be involved throughout.

"I believe we will be competitive in Spain and going forward," he said.

"You don't know what other teams are going to do, we're working hard to understand tyres and the car and continuously develop it; we know others will be doing the same.

"You can never be confident you understand everything or that others won't up their game and give you a harder time. But within the team at the moment there is a positive feeling."

McLaren, like most teams, will have a performance upgrade on their car at Barcelona's Circuit de Catalunya this weekend.

In their case, it will be a raised nose and revised front wing design.

McLaren had been almost alone in running a lower nose that avoided the 'platypus' front section on most of the cars.

The new design still eschews the ugly 'step' sported by their rivals, but loses some of the aesthetic appeal of the graceful curves of the previous design by raising the nose to improve aerodynamics.

Whitmarsh admitted that part of the reason for the new nose was looking at the other cars and realising raising the front of the car would improve performance.

But he added: "If you look at the detail of it, the height of the front of the nose is one of the more minor pieces of that new front wing assembly. There is a range of things."

The new nose was tried out by test driver Oliver Turvey on the final day of last week's test in Mugello, Italy.

Whitmarsh said the new design would be evaluated by race drivers Hamilton and Button in practice in Spain and that there was a "reasonable chance you'll see it (in the race) on Sunday".

McLaren's chances in a couple of races this season have been affected by pit-stop problems - Hamilton, in particular, suffered badly in Bahrain when he might have been fourth rather than eighth had he not been delayed at his pit stops.

Whitmarsh said McLaren had analysed what went wrong and had "made some changes to the team and to the process and we will see them on Sunday in Barcelona".