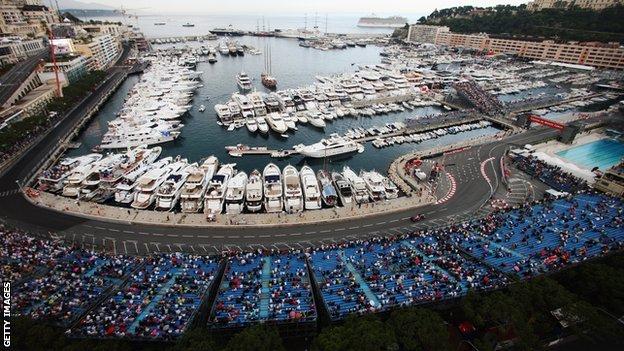 The Monaco Grand Prix is a unique race and it creates a challenge for the drivers and teams like no other.

That challenge is to do with both driver skill and the technical difficulties caused by the tight street circuit.

The Swimming Pool is one of the most demanding sections at Monaco, and a great place to observe both the skill of the drivers and which cars are working best.

It consists of two separate chicanes - a very fast left-right taken at 150mph and a much slower right-left. Each creates its own challenges for the drivers.

Let's look at them individually, taking the fast Swimming Pool One first, and splitting it into the left-hander and the right-hander.

On the entry, you can see the cars in what is called yaw - sliding at an angle of about four or five degrees to straight ahead. The tyres need to slide at that angle to generate the slip that gives them the grip.

It looks like the car has understeer and oversteer at the same time, but it actually has neither.

The good cars can generate that yaw and keep it consistent, using the inertia of the yaw to turn them into the next, right-handed part.

As long as the driver can keep the wheel turned left long enough until he wants to turn it right, he can use the rear inertia to make the car turn, because the car always wants to come back again. Hitting the kerb on the left also helps turn the car into the right.

On Thursday, some cars had a good enough balance through there to give the drivers confidence enough to keep the car in yaw all the way until they needed to turn right. And some did not

But if he has to straighten up first - because the car is wanting to oversteer - and then turn it, he loses the yaw and has to generate it again.

If he has to do that, the second corner becomes a bigger problem, whereas for the better cars it is just a quick kink.

On Thursday, some cars had a good enough balance through there to give the drivers confidence enough to keep the car in yaw all the way until they needed to turn right. And some did not.

Fernando Alonso's Ferrari, for example, had a little too much oversteer.

But he buys into the fact that that is better than understeer and was working around it.

The Toro Rossos, for example, couldn't generate yaw at all - they were understeering too much.

But Pastor Maldonado in the Williams, and the Lotus of Romain Grosjean, looked right - the rear was just on the move but it never got nervous.

The second Swimming Pool chicane is interesting for different reasons.

Here, the barrier sticks out at the apex and it's very easy to clip it and throw the car over the track. But drivers have to get as close as possible so they can straighten the left-hander that follows.

Watching Alonso come into there, he initially had understeer - and was missing the apex. After two or three laps, he began to turn in early, on a trajectory that would have had him hitting the barrier on the inside.

Then he would straighten the steering wheel up as he came off the brakes until the front tyres gripped again and then turn in again to get a good line for the left-hander - all in the braking phase.

The reason for that is these Pirelli tyres do not like braking and turning at the same time - once they are sliding, they never pick up the grip again unless you stop them sliding. Then the driver can reapply the steering and brake again.

Alonso's team-mate Felipe Massa, by contrast, would just turn in and have the understeer all the way through the corner, which meant he was on the wrong line for the left-hander.

Again, the Lotus of Grosjean and Maldonado's Williams looked very well balanced through there, which suggests they may be on for a strong result.

A Formula 1 driver's seating position is quite low and is defined by the regulations and by aerodynamics.

Usually, if they don't see that well, it's not that big a drama. But in Monaco, with the barriers so close, it can be.

The difference between a quick and a slow lap here can be as little as 5cm - getting that bit closer to the wall in all the corners. If a driver doesn't do that, he has not done the ultimate lap.

But if a driver can't see, he can't be that precise, and he has to leave more space - and that's particularly an issue with the high chassis teams use these days. So often drivers will raise their seating position in Monaco to ensure they can see better.

At McLaren, this is less of an issue because they use a lower chassis.

THE TIGHTEST CORNERS IN F1

Typically, a Formula 1 car's front wheels have about 15 degrees of steering angle. But in Monaco you need at least 20 degrees - and as much as 22 if you want the driver to be able to dive up the inside of someone at some of the tight corners, such as Loews.

But if you make a suspension system to suit that, it becomes heavier - it needs to be bigger to have the same stiffness.

So some teams design one suspension system for the other 19 races, and do a one-off for Monaco.

McLaren don't bother, though - they have one with enough clearance for all the tracks.

The choice you make can have an impact on specific racing situations in Monaco.

Look back to the tangle Hamilton had with Ferrari's Felipe Massa at Loews last year, when Massa stuck to the racing line and turned in on the McLaren.

That might not just have been a case of not wanting to concede the position. Maybe he had to. Maybe if he had allowed Hamilton up the inside and run around the outside he would not have had the steering lock to get around the corner and he would have been sitting there facing the barrier looking like an idiot.

But it shows that Hamilton knew he had the lock to go up the inside and still get around the corner - that's the confidence and the advantage having more steering lock can give you.