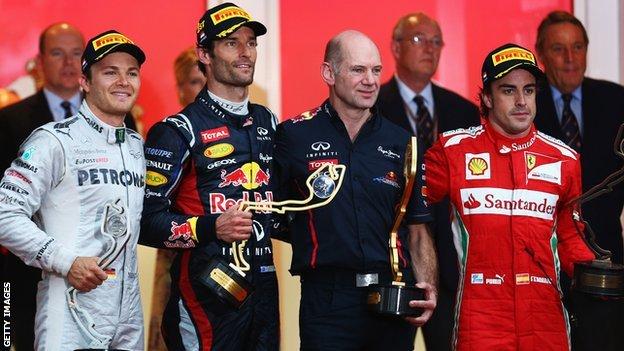 Mark Webber in the first 50 metres of the race.

It was probably the best start of his career - never mind this year - and, from that moment on, it was a matter of looking after the tyres and making sure everything was OK.

By the end, the top six were covered by six seconds. That's great. Anything could have happened, especially with rain threatening. But it didn't.

It was a good, processional race, but that's not what F1 is aiming for.

The high-wearing Pirelli tyres, which have spiced up many of the races this year, were almost too good in Monaco, with all the front-runners managing a one-stop strategy.

The races of Fernando Alonso and Sebastian Vettel were ironic, given that Pirelli has deliberately designed high-wearing tyres.

Webber could actually have done a little bit more help to Vettel in his attempt to gain positions - had he backed Rosberg and Alonso up a little more, Vettel might have been able to sneak in among them

Alonso might have won the race for Ferrari had they decided to keep him out a few laps longer before his pit stop.

As it was, he jumped Lewis Hamilton's McLaren into third place, but Alonso admitted he may even have been able to get Webber and second-placed Nico Rosberg.

And Vettel, who started on the harder soft tyre and ran long, came close to jumping into the lead.

But his tyres went off just that little bit too soon - as the same, newer tyres on the cars of Webber, Rosberg and Alonso finally came up to temperature after a few laps of struggles - and he had to stop. Even so, he finished fourth from ninth on the grid.

Strategy was a gamble for everyone in Monaco. The front-runners didn't know how long their super-soft tyres would last; and the same went for Vettel on his softs.

The safety car at the beginning of the race really helped the guys at the front on super-softs keep them in decent shape.

Normally, the rears get quite hot off the start-line, and if you can't get that back under control again, they deteriorate. That is what defines the normally short length of the first stint.

Vettel probably lost out a little bit as a result of that.

Webber could actually have done a little bit more help to Vettel in his attempt to gain positions - had he backed Rosberg and Alonso up a little more, Vettel might have been able to sneak in among them.

Webber would have been wary of getting jumped by Vettel himself, but he should have been able to make sure that didn't happen, knowing what the minimum time for a pit stop is.

It was a great drive from Webber. He controlled it from the front in very testing conditions - the rain towards the end gave plenty of chance to screw up, but he was flawless.

It was another super performance from Alonso, too. To be leading the championship after six races in a car that, while it is coming on, is still some way off, is the most startling thing about the season.

All the top three in the championship - Alonso, Vettel and Webber - have had car problems this year.

In Alonso's case, his position is simply down to the quality of the driver. He has done astounding things with that car. He's always good off the start, always gets stuck in, and then fights the battle from then on.

The Red Bull is genuinely quick in the races, but it has chief technical officer Adrian Newey scratching his head a bit, nonetheless.

The tyres are difficult, and Red Bull are struggling to get the car balanced front to rear - so fair play to Webber for producing the weekend he did.

McLaren, Ferrari, Mercedes and Lotus are

It's to do with a hole in the floor in front of the rear wheels that improves the aerodynamics. Red Bull's rivals believe this contravenes article 3.12.5 of the technical regulations, which dictates that the floor must be "impervious".

I think there has been a system breakdown at governing body the FIA over the issue.

Red Bull have clearly got a clarification from the FIA saying that it is OK, which the other teams don't agree with - and neither do I.

It's not Red Bull's fault, nor that of the other teams. That's why it would have been wrong to protest against Red Bull - which after a lot of talking, the other teams eventually decided not to do.

I hope there's a clarification before the next race in Canada, to stop the ill-feeling continuing.

Mercedes This was the result of a lot of work on the car.

They have been introducing new parts since the Mugello test, through the Spanish Grand Prix and now into Monaco.

This is not just a few bits and pieces here and there - it's a major piece of work.

There is a revised nose, new front wing, new sidepods with a much deeper undercut in the front forward corner, and new gearbox.

In Mugello and Spain they had various bits and pieces on different cars, but in Monaco they consolidated it and all the updates were on both cars.

It has given them the chance to change the rear suspension geometry a little and it will reduce inertia at the rear of the car.

Mercedes have moved the brake calipers underneath the upright instead of on the front and increased the size of the rear brake ducts, which has probably improved the airflow through that brake assembly.

The changes have meant they have had to redo the rear, side-impact and front crash tests, so they underline both how determined Mercedes are to succeed as well as the breakneck pace of development at the front in F1.

Of the other cars, I am surprised the McLarens were not quicker than they were in Monaco.

The car looked good on the track but Lewis Hamilton could manage only fourth fastest time in qualifying.

Hamilton in Monaco in a decent car should be on pole by a reasonable amount. In relative terms, fourth is quite bad, which suggests the problem is the car.