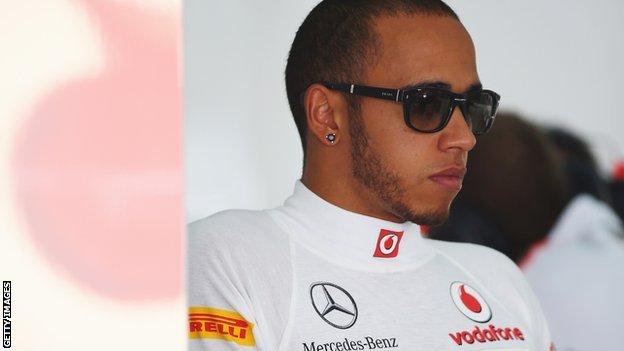 Lewis Hamilton was not happy after the Monaco Grand Prix.

He expected to be fighting for pole position and the race victory and he ended up finishing fifth.

With his McLaren contract expiring at the end of the season, he is thinking about the next move in his career, but no-one knows better what he should than he does.

Hamilton is a fantastic driver, a winner. His qualifying speed is amazing, undoubtedly one of the best in Formula 1.

But he has not won a race yet this year.

Things have not gone as he would have liked at McLaren.

They started the season with the best package - they definitely had the best car in the first three races in Australia, Malaysia and China.

But they didn't get the maximum out of the car.

In the wet in Malaysia, McLaren had a problem with glazing the brakes. In China and Bahrain they had pit-stop problems. In Bahrain they struggled with tyre degradation. In Spain they made a mistake with Hamilton's car in qualifying that got him sent to the back of the grid.

F1 has become much tougher for the teams this year.

The cars are much closer in terms of competitiveness - possibly closer than ever. So you need to get every single detail right.

One of those details is the drivers, especially how they work with the tyres to get them in the right working range in terms of temperatures and make them work in terms of strategy.

If you're not precise in every detail, you are not going to get the maximum out of your car and you cannot win.

The drivers are more important this year. When everything is so close, the drivers make the difference. That's why you see Fernando Alonso leading the championship.

His car was 1.5 seconds a lap slower than the best in Australia, a second slower in Malaysia and China. It has never been on pole position, and he is leading the championship after six races!

He hasn't got the best car, but he has shown that at the moment he is the best driver out there.

I said before the start of the season that one of the drivers I thought would have the best chance this season was Jenson Button.

Jenson is the type of driver you really want in a team because he deals with every situation in the most mature way. He knows how to cope with whatever the car is capable of on a given day.

You need to deal with that situation this season and get the best out of the car - as Alonso is proving.

When the season is so close, you want a driver who does not make any mistakes, because at the end of the year the one who has made the least mistakes will be the one who will make the difference.

Jenson has not had a great run recently but he remains one of the best drivers and I think this season is open enough for him to come back.

I much prefer to race at the old classic tracks such as Spa, Suzuka and Silverstone, where there are wide open spaces, everything is much more real, people are camping, sitting on the grass watching the race with a beer

The season has been very close so far this year. There are no technical secrets at the moment as there were in recent years with the double diffuser, the F-duct or the exhaust-blown diffusers.

The cars came back to reality, in a way, which is why they are much closer in terms of aerodynamic performance.

There have already been six different winners in six races so far this year, and I expect to see even more than that as the season goes on.

Nevertheless, although midfield teams such as Williams and Sauber are doing well from time to time, I expect the top teams to start stretching away a little bit as they can develop their cars faster.

I stayed on a friend's boat for the Monaco Grand Prix weekend. I'm sure that sounds like a dream to some of the F1 fans out there, but I have to admit I'm not that big an admirer of Monaco.

It's very cool for the fans because they can get very close to the cars and the race, but Monaco is a place with a lot of people with a lot of money and I prefer a simpler life.

I much prefer to race at the old classic tracks such as Spa, Suzuka and Silverstone, where there are wide open spaces, everything is much more real, people are camping, sitting on the grass watching the race with a beer, and so on. That's much more my kind of environment.

Still, I thought the boat would be the most comfortable way to see Monaco, to be close to the paddock and so on for my work with BBC Radio 5 live and Pirelli.

It was a nice weekend - if a little noisy, as it's not just F1 racing in Monaco. There are lots of support races, and some of the practice sessions start very early in the morning!

This week I have been doing some promotional events, and I am doing some karting to keep me fit and ready for racing, and then it's off to Canada for the grand prix next weekend.

I'm also very much looking forward to my next drive as Pirelli's F1 test driver - we're off to Spa, actually, just after the European Grand Prix at the end of June. That will be hard work, but a lot of fun.