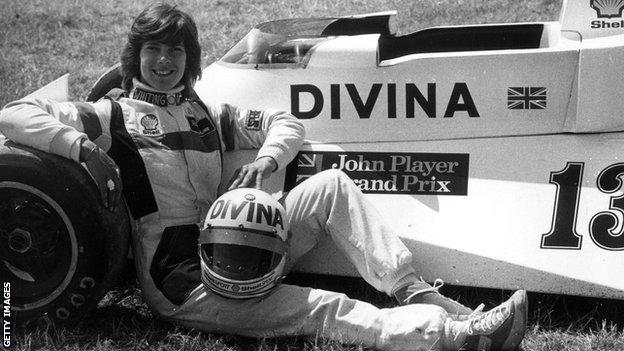 Formula 1 is a man's world. In the 62 years the World Championship has existed, five women have entered a grand prix compared to 822 men in the same period.

"Some people get the impression it's only hard for women to get into F1, but there are thousands of very talented male racers out there trying to get in and never do," Williams development driver Susie Wolff tells BBC Sport.

She's right. Even if you are talented, there are still only 24 seats on the grid and only a handful of those - if any - become vacant each year.

There is only a small percentage of aspiring girl racers - compared to the hundreds of thousands of boys - who attempt a racing career, so the chances of them getting through to F1 is always going to be remote.

"One of the main issues is that young girls have no one to aspire to growing up, whereas a young boy can grow up wanting to be Sebastian Vettel," said Wolff.

And when a woman does get that chance, the extra focus on her achievement will provide added pressure.

"Being a female in a man's world is sometimes very tough," added Wolff. "You just have to work harder.

"Do I care about what men say at the race track? No, not at all. I've always said I race for me, because I love racing. I don't race to prove a point about how well a woman can do against men on the track."

Just as well, considering F1 boss Bernie Ecclestone's recent comments: "If Susie's as quick in a car as she looks good out of a car, she'll be a huge asset."

Wolff laughs it off: "That's just Bernie being Bernie. As a racing driver, you're representing a brand and your appearance is part of your job. But there's a fine line between being feminine and creating attention on yourself because of what you're wearing.

Women in other motorsports

"Sure, it's sometimes difficult when you take your helmet off to talk to your engineer and someone hands you a cap and says put this on. That's when I know I'm having a really bad hair day.

"I love reading fashion magazines, buying handbags, the usual things - but when you're in the moment and focusing on setting up the car, how you look is so irrelevant."

While Wolff agreed that women are generally not risk-takers, she said those who want to be racing drivers break the mould.

"I'm not like other females," she said. "I'm obviously different because of the path I've taken. I'm just as aggressive as the guys when I get my helmet on. Plus F1 is not just about taking risks, but knowing when to take risks and when to back off. It's also about strategy and managing your tyres."

Many believe women lack the strength to cope with the demands of the sport, but Wolff rubbishes that claim. "We have 30% less muscle so we have to work hard, but there's no reason why females can't get strong enough to race an F1 car," she said.

According to Dr Riccardo Ceccarelli, who offers medical support to the Toro Rosso and Lotus F1 teams - and has set up a centre called Formula Medicine which conducts research into how an F1 driver can train to the optimum - strength is not as important as many people think.

"There is a big lack of culture in Formula 1," said Ceccarelli. "Too many drivers focus on physical strength and not enough on the mental side.

"Yes, you need the strong muscles in the neck and upper body so you can have the energy to drive without any tiredness, but once you reach a certain level - there's no more benefit. There's no point putting on extra muscle.

"Endurance training, rather than weight training, then becomes key. The heart will become bigger, which pumps more blood to the brain. That in turn improves the efficiency of the brain and improves the driver's ability to perform all the tasks he needs to perform in the cockpit. Slowly, drivers are coming round to this idea but there's a still long way to go.

"To achieve the optimum in training, our research shows a driver needs to spend just 30% of their time on physical training and the other 70% on brain training. If you can train the brain to be more efficient, it's easier to multi-task and that will make the bigger difference in terms of performance."

Wolff points to a growing number of prominent women in F1, including Frank Williams's daughter Claire Williams, who was recently promoted to the team's board. Sauber's Monisha Kaltenborn, meanwhile, was handed a third of the equity of the team by boss Peter Sauber last month and is in line to become the first female team boss while there is an increasing number of female engineers. "These women are in the sport because they're successful, not because they want more women in the team," said Wolff.

So even if women aren't able to match men physically, that doesn't mean they can't be successful. Endurance and mental training needs to be the focus alongside being given a competitive car and a supportive team.

And until now, the latter has always been the problem. From the five women who had a chance in F1, three failed to qualify for a race - they drove cars that simply weren't good enough.

Italian Giovanna Amati, for example, failed to qualify her Brabham in the three races she attempted in 1992. Later that year, Damon Hill, who would go on to win the world championship four years later, struggled to qualify - and didn't always succeed - in the same car.

In 1975, Lella Lombardi became the first - and as yet only - woman to score a World Championship point in the Spanish Grand Prix, or half-a-point as it turned out because the race was stopped early, when she came sixth in only her third race and went on to enter a further 14 races.

Lombardi aside, four other women were given fewer than three races to adapt to the sport, but for 29-year-old Wolff, now in her seventh season in the German Touring Car series DTM, she has started on a programme with Williams which is aimed at fully preparing her for her racing debut.

So when will we see a female driver be given a real chance to prove herself in an F1 race? "Definitely within the next decade," said Wolff. "There's a few of us close to F1 now. It would just take a massive leap of faith for one of the teams to give a female a chance. There are many people within F1 who would like to see it happen."

Which team principal will be man enough to provide the opportunity?