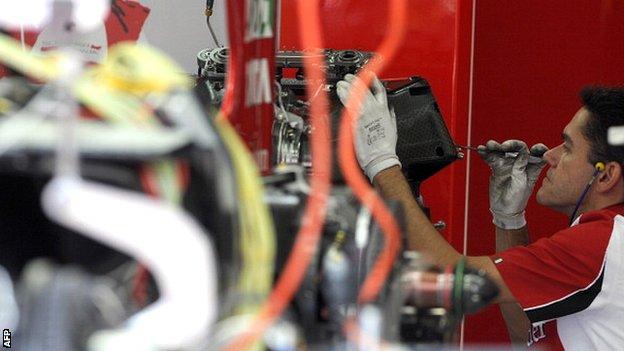 The difficult global economic environment means there is a lot of focus in Formula 1 at the moment on trying to keep costs under control in the future.

There are two different approaches. One is some form of budget cap; the other a way of restricting the resources teams can use.

Talks are heading in the direction of formally including resource restriction in the technical regulations.

That makes sense because it's difficult to see how a budget cap would work.

If you have one team operating on, say, £50m (about the budget of HRT or Marussia, for example) and one on £250m (a decent guess at a top-team budget), where do you cap the budget?

One effective way would be to take the route they have followed with engines and gearbox and extend it to the chassis, and limit the number of components teams can make

If you make the budget cap £150m, the small team still can't find that much money, and it actually becomes harder for them to find the money it had before.

That's because, as the total budget is reduced, the sponsors have to spend less money for a given space on the car.

So, currently, a company that could not afford to back McLaren, but wants to be in F1, will go to a smaller team.

But if it costs less to go to McLaren, they would suddenly find it attractive. The end result of that is less available sponsorship for the smaller teams.

Meanwhile, reducing the amount of engines and gearboxes teams can use has proved a very effective method of cutting costs in F1 in the last few years.

That's almost certainly why the teams are heading down a similar route with the chassis.

The question is, how will they do it?

One effective way would be to take the route they have followed with engines and gearbox and extend it to the chassis, and limit the number of components teams can make.

One of the biggest expenses nowadays is the breakneck pace of development.

Most teams are building huge amounts of new parts, and bringing updates to virtually every race.

But, on average, only about 50% of these work, so the rest are put in the bin. That's a huge waste of money.

How would you stop that? Establish a rule that says the teams have to fix the specifications of their cars for six races at a time.

So a team turns up in Australia at the start of the season - and that is exactly the car they race until Monaco. No updates, no modifications, nothing. Just set-up changes.

Why six races? It's a 20-race championship, which splits into three sections of six races. And the two left over could be accounted for by two wildcards.

A team could play a wildcard if they thought they had a significant enough development step for their car that was worth using straightaway - but once they had played it, then the specification would be fixed for six races again.

It would be easy enough to shape the regulations to make this work.

Governing body, the FIA, could simply define areas of the car where nothing could be changed for that period. They would have to make sure it covered all the main areas teams work on for aerodynamic benefits, such as front and rear wings, brake ducts, deflectors, floors and so on.

These are all areas teams are constantly tweaking, but which the casual fan doesn't really notice at all.

But teams would be allowed to adjust the angle of the flap on the front and rear wings, or change the springs and torsion bars in the suspension, for example, to tune their cars for given races.

Some teams would obviously complain that this approach would erase their chance to fix a bad car - as has happened with Ferrari this season. They started the season more than a second off the pace, but were pretty much on it in Canada last weekend.

But that would simply be the price a team paid for making that kind of mistake - and the wildcards would give them a chance to do something about it earlier if they wanted to.

Of course, this would not bring the costs down for the smaller teams, because they cannot afford to do as much development. But it would stop the big teams from overpowering the small teams by rushing ahead.

As far as the big teams are concerned, it would mean that the new parts they did take to races would have more chance of working, because more time would have been spent developing and analysing them to make sure they worked, rather than doing them in too much of a hurry.

Currently, costs are controlled by a system called resource restriction, which limits the amount of time and resource teams can commit to research and development, and the amount of staff they can employ.

But that cannot control what goes on in people's heads - which is where the ideas come from that lead to the new parts.

Red Bull chief technical officer Adrian Newey, for example, has been around long enough now that he can pretty much visualise mentally what changes to the car design are going to do in terms of aerodynamics and consequently performance.

Newey never stops thinking about his racing car - so how do you restrict his input? You can't stop him or the many others that are involved at the coalface of F1 development from going home for the weekend and coming back to the factory on Monday morning with 20 problems sorted out and ideas for development.

But if he can't change the car for six races, that does put the brakes on it.