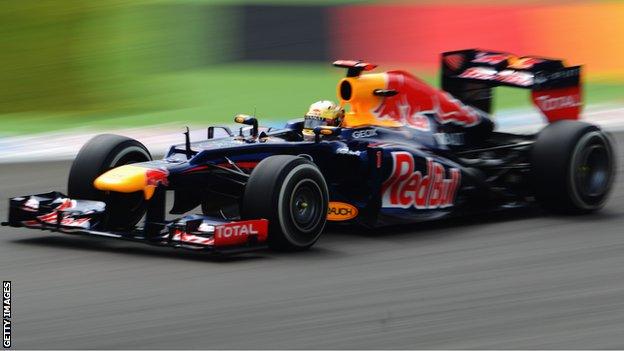 Red Bull have escaped punishment after being accused by Formula 1's governing body of running an illegal engine map.

The world champions were reported to German Grand Prix stewards for contravening a rule forbidding teams from using exhausts for aerodynamic effect.

Stewards said they did not accept all the team's arguments but said it did not contravene the rules as written.

It is likely that a rule clarification will be issued in the near future.

It's an advantage. You don't do things like that which are challengeable unless there is a performance advantage

Horner said the rules were "black and white". But McLaren team boss Martin Whitmarsh said that he hoped the FIA would take advantage of a meeting of the sport's Technical Working Group on Monday to issue a clarification that banned what Red Bull were doing.

Whitmarsh said: "There has been quite a lot of speculation about what they're doing but it is wrong for me to comment on that.

"There is a TWG tomorrow and it will be a good opportunity because if now it is a decision that you're allowed to do that, everyone is going to spend a lot of money to be running that sort of map and doing it as quickly as they can.

"Clearly the FIA is frustrated by it so I think it would be better for there to be the clarity and to stop doing it in the future.

"It's an advantage. You don't do things like that which are challengeable unless there is a performance advantage."

Governing body the FIA claimed Red Bull's engine was delivering less torque for a given throttle position in the mid-range of the engine's rev band.

They said this was a breach of article 5.5.3 of the technical regulations.

The FIA added that the "new torque map will artificially alter the aerodynamic characteristics of both cars", which is forbidden by a specific technical directive.

Basically, the accusation is that the engine's throttles are more open than they should be for a given accelerator position.

While the stewards do not accept all the arguments of the team, they however conclude that as the regulation is written the map presented does not breach article 5.5.3 of the technical regulations

This allows more air into the engine, and produces more blowing of the exhaust.

Red Bull, like many other teams, have directed their exhaust to blow at specific parts of the rear bodywork to enhance aerodynamic downforce.

This is allowed, but it is forbidden to alter the engine mapping to change the torque output of the engine in relation to the position of the accelerator, so that more gases are blowing out of the exhausts than should be.

The FIA technical delegate Jo Bauer said that the engine torque-throttle settings were different than in previous races and that the engine was delivering less torque than it could in the mid-range of the rev band.

But a statement from the race stewards after a meeting with Red Bull team boss Christian Horner and chief technical officer Adrian Newey said no further action would be taken.

"While the stewards do not accept all the arguments of the team, they however conclude that as the regulation is written the map presented does not breach article 5.5.3 of the technical regulations," the statement said.

In effect, the stewards say the rules are not written clearly enough.

The likely result will be that the FIA will issue a clarification of the rules in the near future. It is not known whether this will be in time for next weekend's Hungarian Grand Prix.