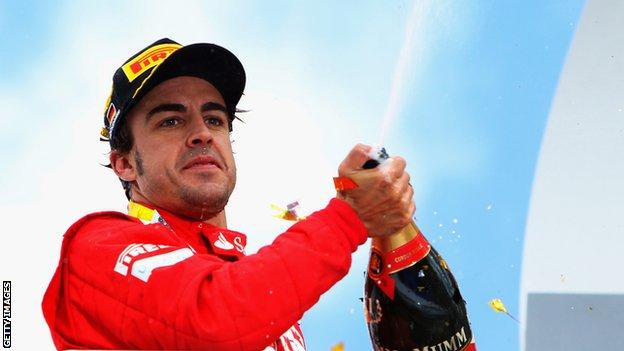 Fernando Alonso's Ferrari was probably the third fastest car in the German Grand Prix yet he won the race from pole position.

It was another remarkable performance from Alonso. I've said many times that if you give him a chance he will take it, and that is what happened at Hockenheim.

Ferrari have a car for all seasons. Alonso put it on pole in the wet, for the second consecutive race, but unlike Silverstone two weeks ago this time he won the race in the dry as well.

He got a good start and controlled the race. He didn't have the quickest car by any means but he managed it well.

Where he needed to be quick - through the last couple of corners, and the first part of the lap before the DRS overtaking zone - he put the car on the limit a bit more to ensure he could not be passed, and everywhere else he looked after the car and tyres.

He did his fastest lap on the penultimate lap, so he clearly had something in reserve if he had really needed to buckle down to it.

He - and the car - also looked after their tyres better than Jenson Button in the McLaren, who ran out of grip towards the end of the race.

Button caught Alonso quite quickly after he had passed Sebastian Vettel's Red Bull at the second pit stops, but Button probably should have taken a bit more time over closing the gap to ensure he had some grip left in the closing laps.

It was another very clever race by Alonso, and the whole Ferrari group deserve a pat on the back because in half a season they have come from having a car that was a second and a half off pole position at the start of the season in Australia to one that won from pole in Germany.

FERRARI STILL HAVE WORK TO DO

Alonso is the only driver to have won three grands prix this year. In fact, only he and Red Bull's Mark Webber have won more than one. So Ferrari are clearly going in the right direction.

Alonso has a substantial advantage in the championship now - 34 points - but it is a long way from won.

If all three top teams got their cars working to their ultimate potential on a dry weekend, he could go from being on pole to fifth on the grid - or even somewhere in the bottom of the top 10 if Lotus and Mercedes did the same.

"It was the 30th victory of Alonso's career, and he is now only one behind Nigel Mansell in the all-time winners' list.

The way he is driving, he will surely move ahead of the Englishman into fourth place behind Michael Schumacher, Alain Prost and Ayrton Senna before the end of the year."

Ferrari need to keep making steps with the car if Alonso is to hold on to his championship lead.

But where Ferrari are succeeding over their rivals is in getting their car working consistently in all conditions and at all races.

That might be related to their poor start to the season - you learn a lot more from a bad car than a good one, and they have had to do some serious work to bring it to where it is now.

Vettel was Alonso's biggest threat for the first two thirds of the race.

After losing second place to Button at the final pit stops, Vettel got the position back again on the penultimate lap, only to be demoted to fifth following a 20-second penalty for overtaking by going off the track.

There is a rule forbidding that. Vettel knew he had gone off the track, and he had the opportunity to give the place back to Button and challenge him again on the last lap. Given the tyre troubles the McLaren was having at that point, he would probably have passed him again.

Red Bull also could have told him to give the place back. But neither of them did it.

The asphalt run-off area is there to allow the cars to go off the track and not go out of the race. It's not there to be used as part of the race track.

The rules are clear and it was a deserved penalty.

McLaren had an encouraging weekend. They introduced a major upgrade package on the car, with a lot of aerodynamic changes, and it showed much better form than in the last two races.

They have clearly made the car better, but there were still worrying signs for them.

In the wet on Saturday, the McLaren still showed the same tendency to fall out of the tyres' operating window, as it has on occasions throughout the season.

So while they have improved the performance of the car, that suggests the wider problem creating that phenomenon still remains.

A car should not behave like that and if you fully understand your car it won't. A competitive car - which the McLaren is - should be quick in all conditions, like the Ferrari and Red Bull.

McLaren are obviously doing something wrong that puts them at risk.

If it happens in the wet and you do not know why, it can happen with the dry tyres, too - as it has on occasion already, with Button particularly.

Of the other teams, Sauber deserve a pat on the back for their performance.

Sergio Perez came from 17th on the grid to take sixth after Vettel's penalty. That's a really good drive and, to put the icing on the cake, team-mate Kamui Kobayashi was fourth after starting 12th.

The Sauber has looked like a good car all season, and they have closed the gap on Mercedes in the battle for fifth place in the constructors' championship quite a lot with that result.

However, if the Sauber car is capable of doing that in the race, the drivers really should be able to qualify it in the top 10 and they are not doing that often enough.

Gary Anderson, the former technical director of the Jordan, Stewart and Jaguar teams, is the BBC F1 technical analyst. He was talking to BBC Sport's Andrew Benson