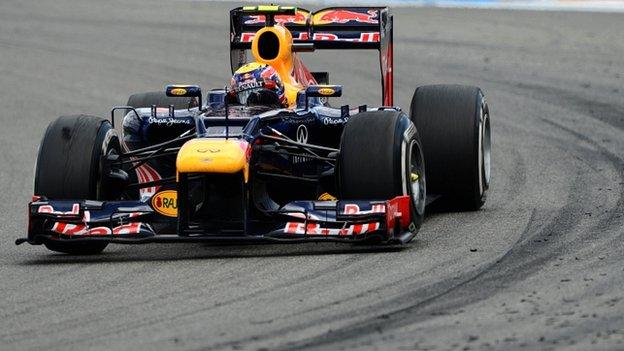 Formula 1 bosses are working to introduce a rule change to outlaw controversial engine settings on the Red Bull.

The issue arose at Sunday's German Grand Prix and was discussed at a meeting of senior officials on Monday.

Red Bull were cleared by race stewards after accusations by governing body the FIA of running illegal engine settings.

Torque is defined as "the twisting or rotary force in a piece of mechanism (as a measurable quantity)".

The amount of torque in relation to the engine speed can have an affect on the car's traction.

Torque definition according to the Oxford English Dictionary

The FIA is trying to produce a rule clarification in time for this weekend's Hungarian Grand Prix.

But it wants to ensure any rule change does not lead to other problems and no decision has yet been made on whether that will be possible.

It is unlikely there will be a decision before the end of Wednesday.

The row revolves around an immensely complicated issue to do with the computer settings - so-called maps - that control the amount of torque delivered by the engine in various conditions.

"To fix the loophole, the FIA could write a rule that said: "The accelerator pedal travel will be defined as 0% (minimum) to 100% (maximum) and at any position between these two end stops the percentage torque output of the engine base torque map for the measured engine speed must match the accelerator pedal percentage +/- 1%...

"This would mean the relationship between throttle pedal position and the torque delivery must be linear.

"And the rule could finish by saying: "… and the percentage of throttle body opening must match the accelerator pedal percentage +/- 10%.

"That would mean any change in torque characteristics could not be done by just retarding the ignition - a common method of employing engine braking - while leaving the throttle open to pump air through the engine and exhausts, which is a way of using the exhausts for aerodynamic effect.

"Allowing a margin of +/- 10% provides some leeway for the characteristics of different engines, as all have different operating requirements."

The FIA's concern is that Red Bull and engine manufacturer Renault are using reduced torque settings for a given engine speed. These act as a form of traction control, limiting wheelspin out of corners.

Rival teams believe that Red Bull's actions also allow them to make more effective use of the exhaust gases for aerodynamic effect, allowing the exhausts to pump gases over aerodynamically sensitive parts more than should be acceptable under rule changes introduced for this season.

Governing body the FIA found that Red Bull's engine was delivering less torque at full throttle in the mid-range of the engine's rev band in Germany than it had at the preceding British Grand Prix.

They said this was a breach of article 5.5.3 of the technical regulations, which states that the "maximum accelerator travel position must correspond to an engine torque demand equal to or greater than the maximum engine torque at the measured engine speed".

The verdict on Sunday said: "While the stewards do not accept all the arguments of the team, they however conclude that as the regulation is written the map presented does not breach article 5.5.3 of the technical regulations."

The idea of the rule is to prevent the engine delivering less power to the wheels than it can do, as doing so is a form of traction control, which is banned.

However, teams are allowed to change their engine maps from race to race - and Red Bull were cleared because there was no definition of how big these changes could be before they were not allowed.

The FIA is aiming to close that loophole.

If it succeeds, it will be a simple matter for Red Bull to switch back to an earlier map than the one they used in Germany.