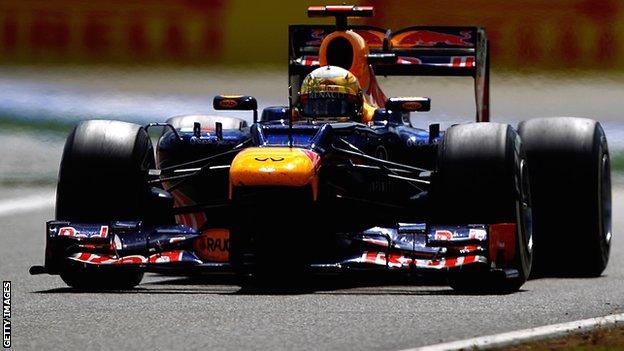 Formula 1 bosses have introduced a rule change to outlaw controversial engine settings on the Red Bull.

The issue, which arose at the German Grand Prix, surrounds settings that ran counter to the intention of the rules, improving cornering performance.

Red Bull were cleared by race stewards because they said the settings did not break the rules as they were written.

The new ruling limits how much teams can change specific settings and applies from the Hungarian Grand Prix.

The row revolves around an immensely complicated issue to do with the computer settings - so-called maps - that control the amount of torque delivered by the engine in various conditions.

Torque is defined as "the twisting or rotary force in a piece of mechanism (as a measurable quantity)".

The amount of torque in relation to the engine speed can have an affect on the car's traction.

Torque definition according to the Oxford English Dictionary

The ruling specifies the limits within which maps can be changed from race to race, as well as other settings.

The FIA's concern in Germany was that Red Bull were using reduced torque settings for a given engine speed. It felt these could act as a form of traction control, limiting wheelspin out of corners.

Governing body the FIA found that Red Bull's engine was delivering less torque at full throttle in the mid-range of the engine's rev band in Germany than it had at the preceding British Grand Prix.

They said this was a breach of article 5.5.3 of the technical regulations, which states that the "maximum accelerator travel position must correspond to an engine torque demand equal to or greater than the maximum engine torque at the measured engine speed".

The verdict on Sunday said: "While the stewards do not accept all the arguments of the team, they however conclude that as the regulation is written the map presented does not breach article 5.5.3 of the technical regulations."

The idea of the rule is to prevent the engine delivering less power to the wheels than it can do.

As teams are allowed to change their engine maps from race to race, Red Bull were cleared because there was no definition of how big these changes could be before they were not allowed.

The FIA has attempted to close the loophole with a new rule that asks teams to nominate any one engine map used in the first four races of the season as a "reference" map.

The clarification says: "Above 6,000rpm, the maximum engine torque may vary by no more than +/- 2% (from the reference map).

Retarding the ignition is a common method of employing engine braking, but was also used last year by teams to blow exhaust gases on to rear bodywork when the driver was not pressing the accelerator pedal.

Retarding the ignition in this way ensures the throttles can be left open when the driver is not pressing the accelerator.

This means air continues to blow out of the exhaust and on to aerodynamically sensitive rear bodywork without the rear wheels pushing the car forwards.

This was last year's must-have technology and was known as exhaust-blown diffusers. The FIA introduced rule changes with the intention of banning it this year.

But although off-throttle blowing has been banned, and the exhausts must now exit in an area that is much less aerodynamically sensitive, most leading teams are still trying to harness exhaust gases and use them for aerodynamics as much as possible.

However, the spotlight has fallen only on Red Bull when it comes to controversial engine settings.

It will be a simple matter for Red Bull to switch back to an earlier map but it is unknown whether it will affect their relative competitiveness, or whether the rule change will affect other leading teams.