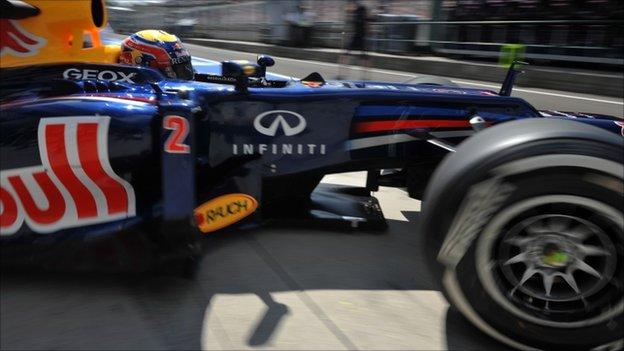 Red Bull arrived at the Hungarian Grand Prix at the centre of a storm over controversial engine settings they were running in Germany last weekend.

In the few days between the races, a new rule has been issued to stop Red Bull and engine supplier Renault doing what they were.

But what was that, and what effect will the new rule have on their performance?

It is to do with the torque curve of the engine - how it delivers the power through the rear wheels - and what effect changing that can have on the driveability of the car and its aerodynamic performance.

What Red Bull and Renault were doing was smoothing out the torque curve to ensure the best possible driveability.

Each team's airbox and exhaust configuration affects the engine's performance and creates peaks and troughs in the torque curve.

So the engine manufacturer will do as much work as possible to optimise the car in whatever specification a team is using to make the car as responsive for the driver as possible.

Changing the torque curve can also have an effect on the aerodynamics of the car because it affects the relationship between the power delivery of the engine and the throttle.

Most top teams have an exhaust set-up that blows gases on to aerodynamic parts at the rear of the car to increase downforce.

If a team or driver doesn't want all the torque, they have to use less throttle.

But if a team can set up the car to have more throttle opening for a given torque output, that will flow more air through the exhaust pipes, which works on the rear brake ducts and outboard edge of the diffuser to create more downforce.

What they are trying to do is protect the rear tyres from spinning and at the same time create as much downforce as possible from the rear of the car.

In qualifying, it would probably be very small differences, but it will be more difficult for Red Bull to look after the rear tyres in the race

So in the example of Red Bull in Germany, if you have less torque output for a given throttle opening, you are reducing wheelspin, which increases tyre life, but getting more downforce because the throttle will be further open for less torque delivery.

To use an extreme example, say the car would normally go through a corner at 50% throttle because the driver wants 50% torque. What you might want is to be driving the corner with the throttle, say, 90% open but still the same torque output from the engine.

That way there is a lot more air going through the engine for the same torque delivery. And then when you open the throttle the remaining 10%, that takes you from 50% torque to 100%.

The numbers involved in the Red Bull-Renault case are not as extreme as that - I understand the variation was more like 10% between the throttle opening and the torque output - but would still have an effect.

The reason the FIA was upset about this was that they had always interpreted the relevant regulation to mean that at 100% throttle the engine had to provide 100% of the torque of which it was ultimately capable.

So the FIA saw the Red Bull's engine settings in Germany and saw that it was producing less torque than it had in previous races, and they felt this was illegal.

But Red Bull and Renault interpreted the rule to mean the engine could not deliver less torque than it was programmed to deliver on that day. That was another way it could be read, so they got away with it.

The new regulation imposed from this race onwards says teams have to provide a "reference" map from one of the first four races of the year, and that the torque of the engine at any race from then on cannot vary by more than 2% from that reference.

There is still some argument going on, with some of the engine manufacturers saying 2% is not enough of a margin for the changes they would like to do to account for the differences in ambient temperature and atmospheric conditions at various circuits.

But while that 2% number might change a little, the rule will be staying for the rest of the season.

There is no doubt this change will affect Red Bull more than any other team, because they were changing their torque settings more than anyone else.

Over one lap in qualifying, it would probably be very small differences, but it will be more difficult for them to look after the rear tyres in the race.

It's also true to say Red Bull did not look very good in first practice in Hungary, on a track which should suit their car.

It's too early to draw any conclusions from that.

But what you can say is that they were doing a lot of mechanical changes to their set-up, more than I have seen them do for a considerable amount of time, and the car did not look that good out on the track.

It will be fascinating to watch their progress through the weekend in Hungary.