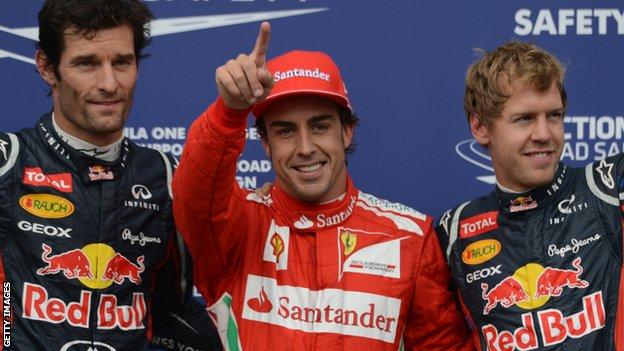 The 2012 Formula 1 season has already been an intoxicating mix of great racing and unpredictable results, but as the teams and drivers head off for their mid-season break it is clear that what it has served up so far has merely been an appetiser.

Had someone tried to set up the final nine races of the season, which are packed into three months starting from the Belgian Grand Prix on 2 September, they could not have scripted it better if they had tried.

Ferrari's Fernando Alonso has a 40-point lead in the championship, deservedly so after producing one of the greatest half-seasons seen from any driver in a very long time.

But the Spaniard, for all his innumerable qualities, does not have the best car and lined up behind him are four world-class drivers, all in faster cars, all but one a world champion, all aiming to haul him in.

Let's look at the strengths and weaknesses of the leading teams.

Ferrari team boss Stefano Domenicali has described the machinery in which Alonso started the season as "a car that was not a car".

The F2012 was a second and a half off the pace in Melbourne in March. It has improved in leaps and bounds since then, but the Hungarian Grand Prix proved it is still far from the fastest car on a fully dry weekend.

As Alonso puts it: "Lotus, McLaren and Red Bull have been ahead of us for the whole championship."

Alonso has benefited from the inconsistency of his rivals. Logic suggests that cannot go on

The reason Alonso is leading the championship by 40 points - a win and a third place - after 11 races is his ability to stay calm and get the most out of the car at all times.

As ever, give him a sniff of victory and he just does not let go. And sometimes, as in the case of arguably his finest win in Valencia, he creates that chance himself.

The Ferrari is arguably the fastest car in the field in the wet.

Elsewhere, he has relied on his own skill and determination to consistently notch up the results. Alonso has finished in the points for the last 23 consecutive races, which is only one shy of the all-time record, set by Michael Schumacher and Ferrari from 2001-3.

Ferrari also deserve a lot of credit, for consistently good pit stops, and solid strategy - although they have arguably let 27 points go begging through a lack of flexibility in Spain, Monaco and Canada.

Alonso has also benefited from the inconsistency of his rivals. But logic suggests that cannot go on and Ferrari's big task is to make the car significantly faster.

As Alonso puts it: "Now we must try and make a good leap forward in terms of performance to allow us to keep the lead in the championship, because in the long term, what we have now will not be enough."

To be completely accurate, it would be better to say it "might not" be enough.

Given the way he has been driving so far, Alonso might be able to hold on even if Ferrari don't improve their relative competitiveness. But it would be a whole lot easier if he had a faster car.

The serene canter to the title that was Sebastian Vettel's 2011 season is a thing of distant memory. How very different things look for the German prodigy this season.

On balance, on race performance, the Red Bull has probably been the strongest car this season, albeit showing nothing like the dominant form it has for the last two years.

But they have struggled to get a handle on the tyres and some atypical errors and problems have hindered their progress.

Vettel and team-mate Mark Webber have been very evenly matched this season, neck and neck in qualifying and it is the Australian who is Alonso's closest pursuer in the championship, albeit by only two points from Vettel.

Both men have had problems.

Vettel lost a certain fourth place - and possibly a third - when he crashed with backmarker Narain Karthikeyan in Malaysia. The Indian earned a penalty for it, but many felt it was Vettel's fault for pulling across him slightly.

He lost a certain win in Valencia with an alternator failure, and his impatience and what some see as an arrogance in himself and his team meant a second place in Germany became fifth after a penalty for illegally overtaking Jenson Button.

Webber, meanwhile, has been hit by what he referred to in Hungary as "friendly fire".

A probable win escaped in Spain when the team erroneously failed to send him out for a second run in second qualifying and he was left down in 12th on the grid.

And a strategy error cost him fifth place - and a finish ahead of Alonso - in Hungary.

The team have also earned themselves a bit of a reputation as 'bad boys' with a series of run-ins with the FIA for pushing the rules too far.

The car, though, is easily good enough for either driver to overhaul Alonso.

The question is, will the intense intra-team battle between Vettel and Webber cost them both points?

McLaren started the season with the out-and-out fastest car and, notwithstanding a mini-slump in late June and early July, have continued to have it for the vast majority of the season.

The McLaren has proved very sensitive to tyre temperature, a problem that has left both drivers struggling in the wet

Yet largely because of a series of operational errors, Lewis Hamilton finds himself 47 points behind Alonso in the championship.

Hamilton, by and large, has driven extremely well this season. Gone is the uncertain, haunted, error-prone figure of 2011, and in its place is a much calmer more serene driver. Only Alonso has driven better.

Be that as it may, Hamilton's biggest concerns surround whether McLaren can come to operate their car as effectively over a wide range of conditions as Ferrari do.

The McLaren has proved very sensitive to tyre temperature, a problem that has only really been apparent on Jenson Button's car in the dry, but has left both drivers struggling in the wet.

If McLaren cannot fix that, Hamilton could find himself losing more big chunks of points to Alonso and other rivals when next there is a wet race.

Bar a brilliant win in Australia and strong seconds in China and Germany, Button's season has been a disappointment for such a quality driver, and he is out of title contention.

Lotus are yet to win a race but Kimi Raikkonen is a real championship threat.

Their problem has been qualifying at the front - the car is very fast in races, but they have often left themselves too much ground to make up.

Raikkonen's team-mate Romain Grosjean has been making too many errors and is too far behind to be considered a serious contender for the title, although a win is far from out of the question.

But while the Frenchman had the edge on Raikkonen for much of the first half of the season, the Finn appears to have found his mojo again.

Raikkonen was stunning in finishing second - and nearly winning - in Hungary.

And he is always brilliant at Belgium's Spa-Francorchamps - Raikkonen has either won or not finished every race he has competed in there since 2004.

Lotus are expected to race their new straight-line speed boosting device there, a track where it could provide a decisive advantage.

Raikkonen is only one point further adrift of Alonso than Hamilton is. A win at Spa and it really would be game on for him in the championship.