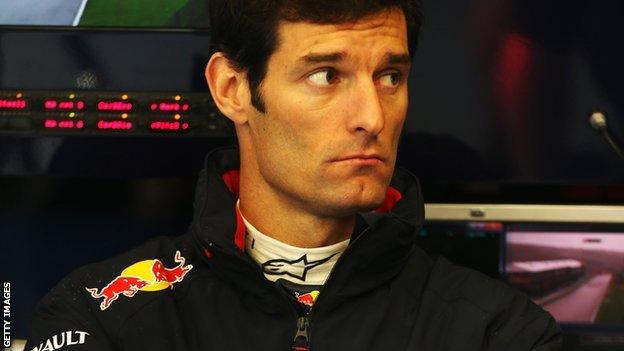 Mark Webber's hopes of winning the Belgian Grand Prix have been hit by a five-place grid penalty for a gearbox change on his Red Bull.

The grid drop is the statutory penalty for changing a gearbox before the end of its mandatory five-race life.

It means the Australian, second in the championship and 40 points behind Ferrari's Fernando Alonso, can start Sunday's race no higher than sixth.

It is the second time Webber has suffered such a penalty in three races.

The first time was at the German Grand Prix on 22 July. The gearbox was damaged by a differential failure that affected Webber's pace in the closing stages of the Hungarian race on 31 July.

"I've known about it [the penalty] for a month," Webber said.

The 36-year-old is just two points ahead of team-mate Sebastian Vettel in the championship.

Team boss Christian Horner said on Friday that the two men would be allowed to fight for the title without the team favouring one or the other throughout the season despite the tensions that arose in a similar situation in 2010.

"Our aim is to get both drivers up there with Fernando," Horner said.

"2010 was a big year for the team. It was the first year we won the drivers' and constructors' championship.

"We gave both drivers the opportunity to go for the title and it came down to the final ace in Abu Dhabi and that will be very much the aim this year.

"Both drivers are fully in the race for the championship and they both know they need each other to take points off Fernando as well."