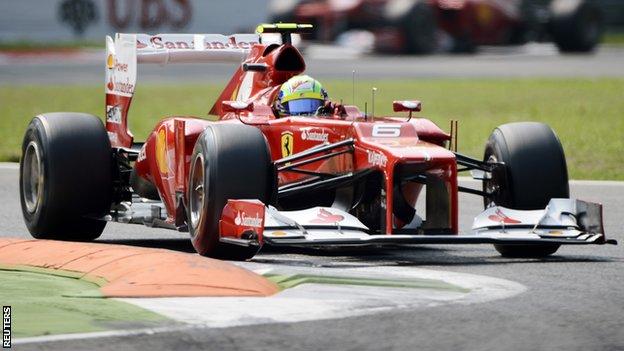 Massa, the 2008 championship runner-up, is fighting for his seat in 2013 after a season of disappointing results.

In Italy, he qualified an impressive third and ran as high as second before fading and finishing fourth.

"It was unfortunate," said Massa. "The degradation was really massive on our cars."

Massa, who suffered a life-threatening injury in an accident in qualifying for the 2009 Hungarian Grand Prix, trails championship leader and Ferrari team-mate Fernando Alonso by 132 points and has failed to reach the podium since the 2010 Korean Grand Prix.

The run of form has led to speculation his Ferrari career, which began in 2006, could be over when his contract finishes at the end of the season.

"For sure my own personal race was very important," said Massa. "But also helping Fernando as well to be in the condition to fight for the championship, which we know is very important for the team. I think both came together during the race."

Kimi Raikkonen, who has scored points in all but one race this season, finished fifth to move up to third in the championship, however the Finn lamented the team's lack of speed.

"We were too slow in a straight line, making it very difficult to hold off anyone and even with the DRS it was difficult to overtake the cars in front," he said.

"We came into the race looking for sixth or seventh so fifth is the maximum we could have done here this weekend."

Michael Schumacher achieved his second best result of the season, finishing sixth - one place ahead of Mercedes team-mate Nico Rosberg.

"It was a fun race today although I must admit that, following our performance on Friday, I had secretly hoped we would be able to move up the field," said the seven-time world champion.

"I ran out of laps this afternoon and, if the race had been a bit longer, I'd have been able to battle even further forward. Overall, though, we got everything out of the car."

Paul di Resta qualified a career-best fourth, but a gearbox penalty saw him demoted five places and he struggled to make progress in the race.

"Coming into this weekend I probably would have settled for eighth place, but when you consider the pace we showed in qualifying yesterday, we certainly had high hopes for the race.

"Our pace was much stronger towards the end of the race but there was no way I could keep the Mercedes behind me and with their two-stop strategy."

Monza is the fastest circuit of the year with an average lap speed of 237kph. The season average is 210kph.

Jerome D'Ambrosio, who was stepping in for Romain Grosjean at Lotus as the Frenchman was banned for this race, finished out of the points in 13th.

"After losing my Kers on lap six it was always going to be tough as that's worth about half a second per lap around here," he said.

"My main aim was to finish the race and I've achieved that so it's not so bad overall. It was great to be back in the car and I've learnt a lot this weekend."