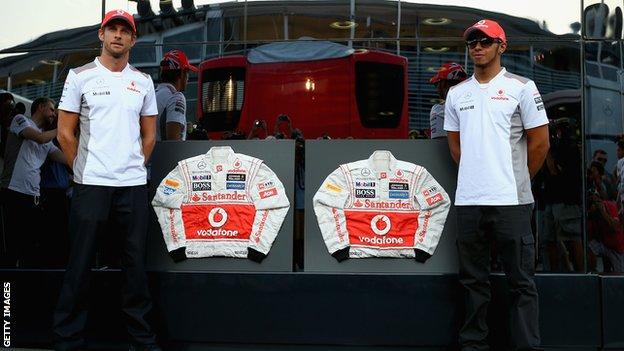 Hamilton is 37 points behind the championship leader, Ferrari's Fernando Alonso, who has a 78-point advantage over Button with 175 still available.

But team boss Martin Whitmarsh said: "At the moment, the dynamics are right within the team and it will be some time before we change our approach."

Button said: "I'm out to race. I think Lewis doesn't need my help."

I'm out to race. I think Lewis doesn't need my help

The 2009 world champion, who retired with a fuel-system problem in Sunday's Italian Grand Prix while running second to eventual victor Hamilton, has not given up on his own title hopes and said he would continue to race for himself.

"Lewis is doing a great job as it is," Button said. "As always, I go out to win. I'm not going to go out and pedal round and sit behind my team-mate."

Hamilton's victory moved him up from fifth to second in the championship while Alonso finished third. The two Red Bull drivers Sebastian Vettel and Mark Webber, who went into the race second and third in the table, failed to finish.

Vettel's retirement meant he slipped from second in the championship to fourth, albeit only two points behind Hamilton and one adrift of Lotus's Kimi Raikkonen.

Hamilton's win was McLaren's third in a row, following his victory in Hungary in July and Button's in Belgium the week before Italy.

But Hamilton dismissed suggestions that McLaren were now in the strongest position.

"If Fernando had a better qualifying, I'm sure he would have been up there with me and made the race perhaps a little bit harder than it was.

"No, Ferrari seem like they're very, very quick and we need to stay on it to try to continue to compete with them."

Alonso had appeared set to contest pole position with Hamilton but qualified 10th following a failure of his rear anti-roll bar in the top-10 grid shoot-out.

The Spaniard fought up through the field to finish third in the race.

"Looking at the championship," Alonso said, "we say we need to concentrate [at each race on] who is second. It was Vettel yesterday and we were happy for the McLarens to be strong this weekend. And yeah, the race went like a movie for us, like a dream."

He added: "McLaren have won the last three grands prix and they are in top form.

"[I was asked] in winter testing who is the driver I respect most and that was Lewis and we're still here, 13 races afterwards, we are first and second in the championship. It will be tough until the end."

330 comments
Back to top
unknown