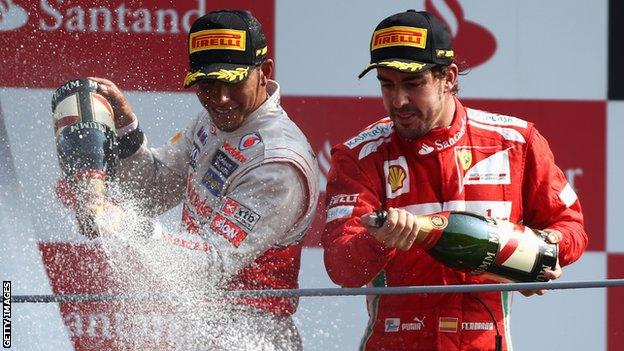 McLaren were pretty much assured of winning the Italian Grand Prix from the moment Fernando Alonso had a problem with his Ferrari in qualifying and ended up 10th on the grid.

Alonso was quick all weekend and would have been up there among the McLarens from the beginning of the race had he not suffered a rear anti-roll bar problem which stopped him fighting for pole.

There are 40-odd points between Hamilton and Button and McLaren are going to have to start making tough decisions pretty soon about whether Button should start sacrificing his results to help Hamilton's title bid.

Once he was out of the picture, it was McLaren's race to lose and Lewis Hamilton nailed it. Jenson Button would have taken second place were it not for a problem with his fuel system.

Button felt he would have had a chance to chase down Hamilton in the second stint. It was a tall order for him to win it from where he was, seven seconds adrift of Hamilton, but it would have been nice to see them going at it because they are not bosom buddies any more.

They used to be pretty close but they seem to have drifted apart, probably as a result of their different characters.

Hamilton can be a bit of a spoilt kid at times and Button is a fairly grown-up man. That difference in characters does separate people.

You attack the job in hand from the position of the person you are. Hamilton is a very quick driver, but he seems in the last little while to have lost the person he used to be.

McLaren have had a couple of blips this season but they have on balance had the fastest car, and they should be able to carry that through to the end of the championship.

But there are 40-odd points between Hamilton and Button, and McLaren are going to have to start making tough decisions pretty soon about whether Button should start sacrificing his own results to help Hamilton's title bid.

The big problem with that is the situation between the drivers, as well as the question of whether Hamilton is leaving for Mercedes next year, as it appears he may well do.

It does not matter to McLaren whether Hamilton wins the race and Button finishes second or the other way around, because the team will still get the same points in the constructors' championship, which is what most teams care about most.

The drivers care about their championship but if push comes to shove I'm not sure McLaren will make the decision to back Hamilton in the drivers'.

So that might have to come from the drivers, and their relationship does not look like it is in a position where Button will help Hamilton out.

Button still believes he can win the title, and if he can string three strong races together, with Alonso out of the top two or three, he would be back in it.

Whether they can overhaul the wily old Spaniard at the top of the championship remains to be seen.

Alonso has a smile on his face and he is relishing the job he has taken on - to win the championship in a car that really shouldn't be capable of it.

He is driving at the very top level every weekend and produced another great race in Italy.

Alonso moved up from 10th on the grid, and although he had a damaged car after Sebastian Vettel pushed him onto the grass at 180mph, he was able to camouflage it.

Alonso is going to take some beating because unless the Ferrari has reliability problems, or he gets caught up in an accident like he did in Belgium, it looks like he will drag a decent result out of it at every race.

The last three races, in Hungary, Belgium and Italy, have been on tracks that have very specific characteristics.

The final seven are more stable in terms of the car-performance window they require.

So the championship may come down to who brings the best box of new bits to Singapore.

PEREZ MAKES A VIRTUE OF VARIETY

The most eye-catching performance in the race came from Sauber's Sergio Perez, who started on the 'hard' rather than the 'medium' tyre in 12th place, did not stop until lap 29 and then fought up past the Ferraris to finish second behind Hamilton.

The Mexican drove a very sensible race. Had he stopped a couple of laps earlier, his overall race time would have been quicker, but because he went so long to his stop meant he had the confidence to drive the wheels off his car in the final stint, when he was on the medium tyre and everyone else had switched to the hard.

Sauber have shown very strong race pace this season, but they often struggle in qualifying. They have a better car than their grid position is allowing them to show.

The team and drivers collectively are not able to get the best out of it consistently on low fuel in qualifying but once it has fuel in it the Sauber is clearly a very consistent car to drive and they are able to pull out a good result.

Monza was the first race at which Red Bull had not scored any points since Korea in 2010 and Sebastian Vettel retired with his second alternator failure in a race this year. It was also the second of the Italy weekend, after an earlier one in Friday practice.

I'm told the alternator was modified after it failed in Valencia but that Belgium, the week before Italy, was the first time they had run the new version.

The problem is one of excessive internal temperature - effectively a thermal overload because the alternator is working too hard.

Red Bull have not said why it is happening but their design chief Adrian Newey is well known for packaging his cars very tightly, and I'm sure that is true of the battery in the RB8.

Going way back to my days at Jordan in the 1990s, we had a similar problem with our alternators on the Peugeot engines. We solved it by producing a housing for them with a water jacket and used the engine water to keep the temperature stable. This works better than just cooling it with air.

It is definitely a packaging problem and between Red Bull and Renault they have to have a look at it and get it fixed quickly because in this championship teams cannot afford to throw away races.

We saw Alonso not score any points in Spa and suddenly the lead for which he had worked so hard appeared to be disappearing pretty quickly. It has come back again now because Vettel did not score in Italy.

Behind Alonso, there are only two points between Hamilton, Lotus's Kimi Raikkonen and Vettel for second, third and fourth in the championship and Mark Webber is not far behind.

Alonso may well not need any extra help but he might get it anyway because the McLaren and Red Bull drivers will be fighting with each other for a while, taking points off each other.

It would not take much for there to be a bit of an implosion at either of those teams.

Alonso is going to be rubbing his hands about that.

Gary Anderson, the former technical director of the Jordan, Stewart and Jaguar teams, is BBC F1's technical analyst. He was talking to BBC Sport's Andrew Benson.