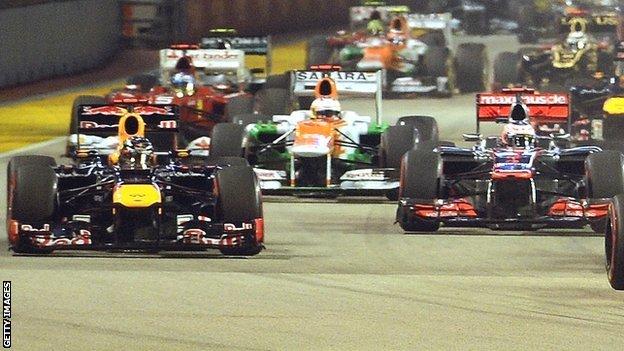 Formula 1 teams have written to governing body the FIA expressing their concerns about proposed changes to the way the sport is run.

They are worried by plans to increase entry fees, restrict teams' input into rule-making and a potential increase in the power of F1 boss Bernie Ecclestone.

Their observations come ahead of an FIA meeting to finalise next year's rules.

Currently, teams do not know the entry date for next year's championship, or how much the entry fee will be.

The standard entry date of 30 June was moved to the end of September to allow more time for discussions on cost control, which have so far not come to fruition.

But no new entry date has so far been published ahead of Friday's meeting of the FIA World Motor Sport Council, F1's legislative body.

"Currently, costs are controlled by a system called resource restriction, which limits the amount of time and resource teams can commit to research and development, and the amount of staff they can employ. But that cannot control what goes on in people's heads - which is where the ideas come from that lead to the new parts."

The letter, written by some teams to Todt this week, says: "At a time when the FIA and teams are actively engaged in cost control, the teams wish to repeat their concern at such a significant increase."

The proposal has come up in talks between Ecclestone and Todt.

The FIA has been seeking more money from Ecclestone's companies to ensure it is sufficiently funded. In return, Ecclestone has been demanding concessions on how the sport is run. The FIA have decided they could secure some of the costs from the teams.

The letter also expresses the discontent over plans to fundamentally change the process of rules formulation.

Among the proposals is to abolish the sporting and technical working groups.

In the current model of governance, assemblies of senior team personnel meet in these groups to thrash out rule changes.

Once agreed they are passed to the F1 Commission - a collection of teams, sponsors, circuits and Ecclestone and the FIA president - for agreement before they are rubber-stamped by the World Council.

But the F1 Commission has not met for months and now Todt and Ecclestone are proposing to ditch the SWG and TWG.

"At a time when the FIA and Teams are actively engaged in cost control, the Teams wish to repeat their concern at such a significant increase. Moreover, Team fees and Driver Super Licence fees should be kept separate, and not bundled together."

Proposals for next year also include a plan to revamp the F1 Commission to reduce the number of teams involved from all 12 to six.

The teams say they are "concerned over the proposed composition… retaining the status quo is the preferred option".

The signatories are worried that reducing the teams' representation on the F1 Commission will make it easier for Ecclestone to push through changes he desires.

The third part of the letter refers to ongoing discussions to try to enshrine the sport's Resource Restriction Agreement into the sporting regulations.

In June, 10 of the 12 teams agreed with the FIA a basis on which this would happen ahead. Red Bull and junior team Toro Rosso opposed it.

The agreement could at that point have been adopted as the rules dictate that a change can be made if it is agreed by a simple majority of teams before 30 June, but that unanimity is needed after that date.

The modification was not voted through at the time in order to give more time to try to come to a unanimous agreement, but the two Red Bull teams have continued to block it.

The letter asks Todt to enshrine the RRA into the 2013 rules on a voluntary basis ahead of full adoption in 2014.

"We would like to support the full introduction of a chassis RRA and power-unit cost limitations in 2014, with a voluntary chassis RRA submission procedure to the FIA implemented for 2013," it says.

The letter has not been signed by all the teams, but the signatories are a mixture of teams involved in the umbrella group Fota and those that are not, which are Ferrari, Red Bull, Toro Rosso, Sauber and HRT.

Sauber and HRT have signed the letter. Ferrari said they had not because they preferred to deal directly with the FIA and Ecclestone.