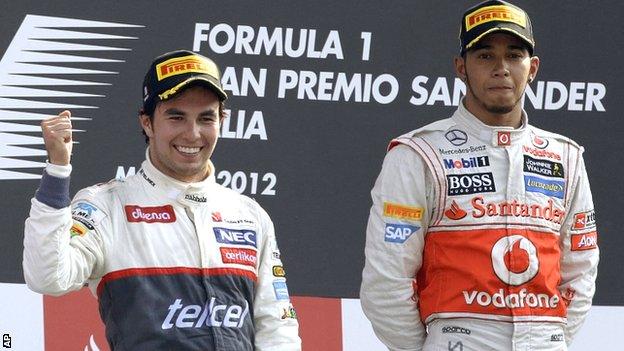 McLaren have confirmed the acquisition of Sergio Perez on a multi-year deal from 2013 as a replacement for Lewis Hamilton,

The 22-year-old Mexican, who has secured three podium finishes in his first two seasons in Formula 1 with Sauber, will partner Jenson Button.

"I'm thrilled and delighted to have become a McLaren driver," said Perez.

"The McLaren name is one of the greatest in the history of F1. I'm truly honoured that they've chosen me."

McLaren team principal Martin Whitmarsh has hailed Perez as an "extremely exciting prospect for the future" and believes he can follow in Hamilton's footsteps by winning the world championship for the Woking-based team.

Perez is a product of Ferrari's driver academy and had been linked with a move to the Italian team as replacement for Felipe Massa.

Perez said: "For more than 40 years, McLaren have been a team every racing driver has aspired to drive for.

"I was brought up on the great stories of Ayrton Senna's many world championship triumphs for McLaren.

"Lewis Hamilton's move to Mercedes is the biggest development in the Formula 1 driver market for three years."

"I'm under no illusion that it is indeed a very big step - as it would be for any driver - but I'm ready for it."

Perez has enjoyed an impressive 2012 season with Sauber, taking podium finishes in Malaysia, Canada and Italy to catch the eye of McLaren as they considered Hamilton's replacement.

"It was a string of giant-killing performances that showed us that Sergio lacks nothing in terms of speed and commitment," said Whitmarsh.

"He's perfectly poised to develop into a world championship challenger. His addition to the McLaren team provides us with the perfect two-pronged driver line-up for the new season."