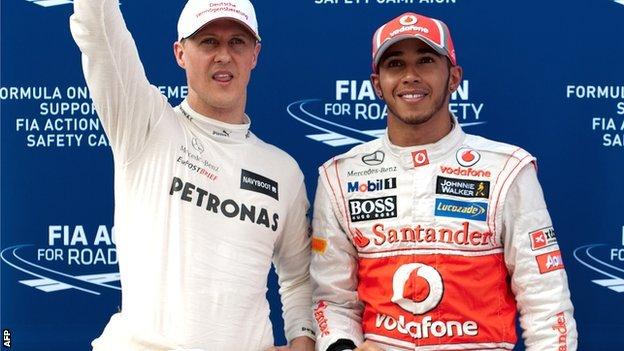 Michael Schumacher has not decided whether he wants to continue racing in Formula 1 next year.

The German legend has been dropped by Mercedes in favour of Lewis Hamilton, and is left with the choice of retiring or trying to find a drive elsewhere.

His manager Sabine Kehm said: "Michael didn't stay at Mercedes because he wasn't sure he wanted to drive and that didn't change over time."

Asked whether he had now made that decision, Kehm said: "No."

She insisted that Schumacher "would have been able to sign if he had wanted to earlier in the summer".

There are a number of seats potentially available for Schumacher should he wish to continue.

Autosport reported on Friday that Kehm had had talks with Sauber at last weekend's Singapore Grand Prix about Schumacher joining the team.

But Kehm denied this, saying her visit was social.

"It's true I was at Sauber," she said. "I have been there quite often. I have known them for years. But that doesn't mean anything more than I'm regularly there."

But a Sauber spokesman said the team would not comment on any of the drivers linked to the team.

There are few other options for Schumacher should he wish to continue racing.

There is a potential opening at Ferrari, but it is thought most likely that Felipe Massa will be retained as Fernando Alonso's team-mate next season.

Williams have a vacancy alongside Pastor Maldonado, but that is likely to be filled by their reserve driver Valtteri Bottas if they do not keep their current second driver Bruno Senna.

Lotus have not confirmed their line-up, but Kimi Raikkonen and Romain Grosjean are both under contract and expected to stay.

Force India are expected to continue with rising stars Paul di Resta and Nico Hulkenberg, although the German has been linked with a possible Ferrari move.

It is unlikely Schumacher would consider a role at lower-grid teams Toro Rosso, Caterham, Marussia or HRT, or that any of them could afford to pay him.