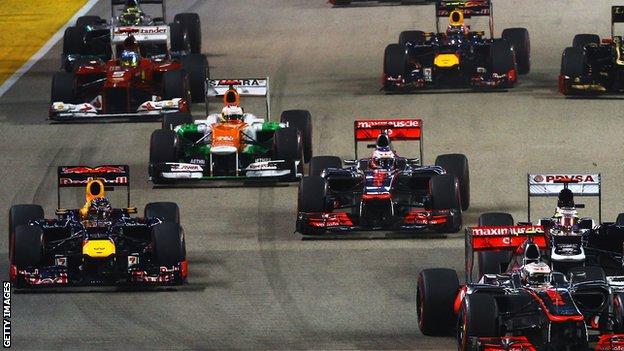 Formula 1's governing body the FIA is considering tougher tests on front wings after complaints some teams were pushing their designs too far.

There have been suggestions that some teams were allowing their wings to rotate under load to give their cars a performance advantage.

Ahead of this weekend's Japanese GP, the FIA tried some exploratory tests to see if any team was going too far.

The issue is a recurring theme in F1 and arose again at the Singapore GP.

BBC F1 technical analyst Gary Anderson said: "People noticed that when the Red Bull was jacked up, the back of its front wing went down.

"That is not allowed, although the wing passed all its FIA tests.

"It was reported to the FIA and they have been looking at coming up with a different load test for the wing's rigidity."

The rules say aerodynamic parts must be rigidly attached to the car.

It has been reported that the front wings of the Red Bull and the McLaren rotated when the cars were at speed.

This would reduce the downforce created by the wing, allowing the team to run more front downforce to give the car more grip in slow corners without the consequent penalty of too much front downforce in high-speed corners and greater drag on the straights.

FIA inspectors tried new exploratory tests on the front wings of the Ferrari, McLaren, Red Bull and Mercedes in Japan.

There is no question of the teams failing the new tests as they are not yet part of the regulations.

The FIA has the right to introduce new tests on the rigidity of front wings if it feels any team is doing anything that contravenes the intention of the rules.

What does the front wing do?

The front wing is an important component because it is where the passing air first meets an F1 car. The smallest of alterations to its design can alter the entire aerodynamic performance of the car.

Nothing untoward was found in Japan on Thursday, but the FIA is still gathering information and plans to test another three or four cars on Friday at Suzuka.

"The wing must deflect no more than 20mm under that load.

"There is nothing in the rules about rotation so the FIA has moved the point of application of the load test rearward to try to ensure it catches any wings moving in that way."

McLaren team principal Martin Whitmarsh said on Wednesday: "I think the regulations require the wings to be rigid, but of course no wing or aerodynamic surface is infinitely rigid.

"From time to time questions and disputes arise between teams, who feel that other teams are too flexible or whatever.

"I don't envisage any particular problems for McLaren in that regard, and consequently I don't think it is anything that will harm us. I'm also not aware of anything with Red Bull, incidentally.

"I think the FIA technical department have to remain vigilant and be testing front wings, rear wings, and attachment systems all the time - to make sure that not only do they comply with the testing requirements of the regulations, but that the teams don't find other ingenious or creative ways to circumvent the intentions of the regulations.  "From time to time many teams get spoken to by the FIA and expected to correct a situation.

"We're not in such a situation ourselves and I'm not aware, and I don't believe, that it is going to be an issue that will affect the championship."