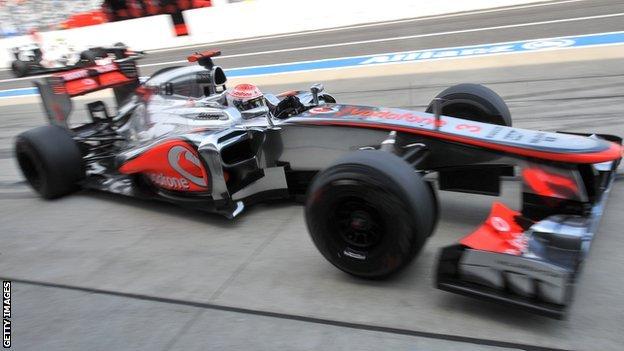 Jenson Button is confident he can fight for victory in Sunday's Japanese Grand Prix despite starting eighth.

The McLaren driver qualified third behind the Red Bulls of Sebastian Vettel and Mark Webber but has a five-place grid penalty for changing a gearbox.

Button said race strategy would be "difficult" because of tyre problems.

Lewis's run yesterday was by the far most consistent, and compared to the Red Bulls it was much, much quicker. It's promising

"The tyres are difficult for everyone here," Button said.

"They have been difficult all year but especially here with blistering and graining - strategy is going to be important.

"It's going to be a thinking drivers' race and our engineers are very good at thinking on their feet in difficult situations.

"It's not going to be easy but we'll give it everything we've got.

"There will be four cars in front that will be very quick in the race, the two Red Bulls and the two Lotus. They will be tough to beat but we will still go for the win."

Button was 0.451secs slower than Vettel's pole position lap, but he said the pace shown by his team-mate Lewis Hamilton during his race-simulation run in Friday practice suggested the McLaren would be strong in the race.

Button did not do a race-simulation run because a set-up mistake meant he ran out of time.

"I felt really good with the car today," Button said after qualifying, "and I really do feel we'll have a good race.

"You've got to think for the win.

"Lewis's run yesterday was by the far most consistent, the least amount of degradation and blisters, and compared to the Red Bulls it was much, much quicker. It's promising."

McLaren have a long history of success in Japan, having clinched seven world championships at the Japanese Grand Prix

Hamilton struggled in qualifying and ended up down in ninth place.

He was hindered by a spin by Lotus driver Kimi Raikkonen, which meant he had to back off on his final qualifying lap, but Hamilton said a mistake on set-up meant he would not have been able to challenge at the front anyway, although he would have been "fourth or fifth".

"I wasn't quick enough," he said. "Big, big struggle in qualifying. Huge mistake with the set-up I went with but that's motor racing.

"Masses of understeeer, full lock everywhere and it wouldn't go round the corner.

"I'll just have to paddle around with the set-up I have and look after my tyres and see if I can make up some places."