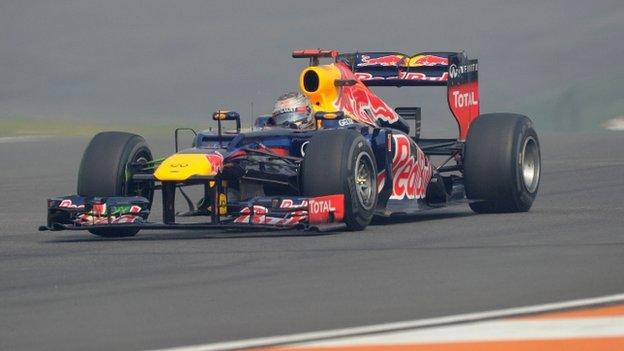 The German was 0.192 seconds faster than Button, with the second Red Bull of Mark Webber third ahead of Lewis Hamilton's McLaren.

Williams's Bruno Senna, who has looked strong all weekend, was sixth fastest.

The headline lap times may not represent the true picture of form - several drivers seemed to struggle to improve significantly on the faster 'soft' tyre.

But Red Bull are strong favourites to lock out the front row of the grid for the third race in a row - Vettel set the fastest time in the first and third sectors of the lap and Webber the best in the middle sector.

That suggests that as long as they can put together a complete lap at their maximum potential they should be comfortably fastest.

Vettel noticeably backed off in the final sector of the lap and is a strong favourite for pole.

McLaren looked much more competitive than they had on Friday, when they admitted they were struggling for one-lap pace.

Vettel improved only marginally on the 'soft' tyre - his fastest lap on the 'hard' tyre earlier in the session was one minute 25.892 seconds, and he lowered it by only 0.050secs in the qualifying-simulation runs at the end.

Ferrari appeared to be struggling in a session in which Alonso completed significantly fewer laps than his rivals and he ended up 0.679secs slower than Vettel.

During the session, Alonso and team-mate Felipe Massa appeared to be practising 'towing' each other down the long straight between Turns Three and Four.

This is where one car follows closely behind another to benefit from reduced drag and therefore faster straight-line speed.

That has led to speculation they may try to use the tactic in qualifying to improve their grid positions.