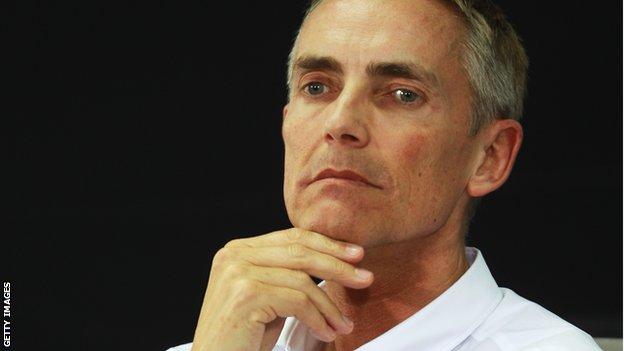 Ecclestone has proposed a $250m (£155m) limit on total spending, including driver salaries, for all teams.

Whitmarsh said: "It's a little bit unrealistic to have a global budget cap. It becomes difficult to pin down and know everyone is comfortably operating within it."

Red Bull Racing spent £176.8m last year but that entity has only 52 employees. Red Bull Technology, which has a further 498 employees, many of which are Red Bull's design team, increased the outfit's total spend to £211.1m in 2011.

It sounds like quite a lot of money, so I don't know how much it's going to help too many teams

Whitmarsh's accusation that a budget cap would be difficult to police has also been levelled at F1's current cost-control device, the Resource Restriction Agreement, which defines staff levels, external spend and research and development limits.

Disagreements over the RRA led to the break-up of the team's union Fota. Ferrari and Red Bull both pulled out last year following accusations from Ferrari that Red Bull were breaking its terms. The organisation continues but with only seven of the 12 teams involved.

The accusations have not been proven and Red Bull deny them.

Talks over cost-control have continued because many of the smaller teams are struggling to break even, with sponsorship difficult to find as a result of the global economic crisis.

Ecclestone's $250m limit is several times the total spend of small teams such as Marussia, Caterham and HRT.

Whitmarsh said: "It [£155m] sounds like quite a lot of money, so I don't know how much it's going to help too many teams.

"The philosophy of controlling costs in F1 is important to our sport. I think we all agree on that. There is a difference of opinion about how you best achieve that.

"Bernie wants one that controls driver salaries and all those things. I think what we should be trying to do is ensure we are spending money in the appropriate places.

The £155m limit of the budget cap proposed by Bernie Ecclestone is considerably higher than the total spend of several F1 teams, with only Red Bull, McLaren, Ferrari and Mercedes close to it.

"I think we should be controlling excessive spend in development.

"The budget cap by Bernie is everything - everything you spend money on. Total cap.

"It has the elegance that you can describe it very quickly but it is very difficult then to find out where that money is and to control it.

"The RRA says: 'Well, what is easy to define?' How much do you spend externally and how many people do you have? Difficult to hide either of those.

"And then it gets on to wind-tunnel hours, CFD (computational fluid dynamics), teraflops, etc.

It effectively says we should be free to pay drivers whatever we want but we should be finding the easy, clear, measurable definable elements of spend and control those.

"They're both trying to do the same thing so they're not against each other, it's just a different philosophy."

Red Bull team boss Christian Horner says his team are committed to keeping costs under control but they feel finding a way to do it through the sport's regulations is more effective.

However, Red Bull have blocked attempts to enshrine the RRA into the sporting regulations.

Horner's objection is that the document is flawed as the teams are different in their nature - he believes teams associated with road-car manufacturers such as Ferrari and Mercedes can easily hide extra work done on F1 in other departments.

Horner also wants engine development costs to be controlled. These are currently outside the RRA.

However, it is also unclear how these would be policed under Ecclestone's proposal exactly because of the different structures of the teams.

Ferrari and Mercedes have engines designed by companies under the same corporate umbrella, whereas Red Bull get theirs from an outside course - Renault.