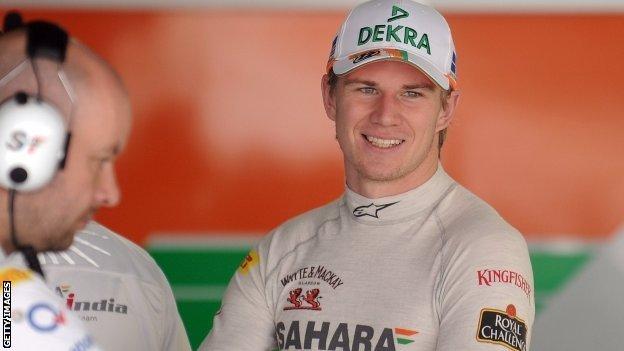 Sauber have named German Nico Hulkenberg as one of their two drivers for the 2013 Formula 1 season.

The 25-year-old, who made his debut in 2010, currently drives for Force India and is 12th in the championship with 49 points.

"We've been observing Nico for some time now and his performances have been very persuasive," said Sauber team principal Monisha Kaltenborn.

One of the most fascinating aspects of Sauber's signing of Nico Hulkenberg for 2013 is that he replaces McLaren-bound Sergio Perez. There are many in Formula 1 who might consider that Sauber have got the best part of that deal.

Perez has certainly had a handful of impressive races this season, but Hulkenberg and his Force India team-mate Paul Di Resta have been going at it hammer-and-tongs with remarkable consistency, and both look to have a strong future.

There has been little to choose between the two, but the impression is that Hulkenberg has slightly edged the intense fight. If Sauber can produce as good a car last year as they have this, the likeable German could have a strong season next year.

Hulkenberg added: "It's a well-placed team and very competitive."

The favourite for the second Sauber seat is their Mexican reserve driver Esteban Gutierrez, who had a run in first practice at the Indian Grand Prix last weekend.

The team have Mexican sponsors, who were brought to the team by Sergio Perez last season. Perez is moving to McLaren for 2013.

The incumbent, Japan's Kamui Kobayashi, still has hopes of retaining his drive and is looking for sponsorship at home in attempt to boost his chances.

Another potential candidate is former Toro Rosso driver Jaime Alguersuari, who is being pushed in certain quarters on account of his strong season in 2011.

Alguersuari, who is also a candidate to replace Hulkenberg at Force India, would also bring with him knowledge of next year's Pirelli tyres - he has been the tyre company's official test driver this season.

The leading candidate to replace Hulkenberg at Force India is German Adrian Sutil, who raced for the team for six years but was dropped at the end of 2011.

Sutil was convicted last February of assault over an incident in a Shanghai nightclub following last year's Chinese Grand Prix.

But team owner and principal Vijay Mallya said in India last weekend that Sutil could make a return in 2013.

Mallya wished Hulkenberg well and labelled his departing driver as a "star of the future".

"Together with Paul Di Resta he has done a brilliant job for us, helping the team score more points than ever before and giving 100% commitment every weekend," said Mallya.

"It has been a pleasure to have Nico with us for the last couple of years and we would like to thank him for all his hard work and wish him well for the future."