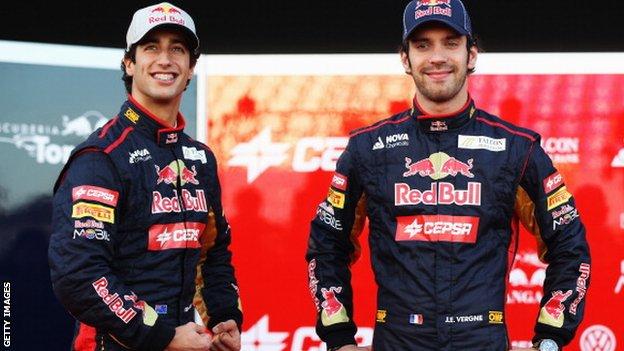 Toro Rosso have announced drivers Daniel Ricciardo and Jean-Eric Vergne will remain with the team next year.

It will be both men's second season at the Italian-based team, who are currently ninth in the constructors' standings with three races remaining.

Vergne has scored 12 points from 17 races, while Ricciardo has nine.

Team principal Franz Tost said: "Since the summer both have scored more points and everyone in the team has been impressed with their maturity."

Australian Ricciardo, 23, said there were "big expectations" for next season but insisted he was "ready" and "willing" to fulfil those demands.

"I feel I have been growing and developing as a driver and my approach to the technical side of the sport has also progressed this year."

Vergne, 22, who finished eighth in Malaysia, admitted it had been a tough season.

"I feel much stronger now and I know I have become a better driver over the course of the season," said the Frenchman.