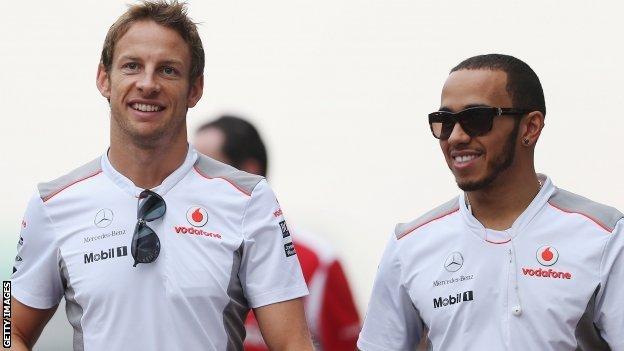 Lewis Hamilton's move to Mercedes next season will be a "big loss" for McLaren, says Jenson Button.

Their three-year partnership ends this year after Hamilton signed a three-year deal with Mercedes after being under the McLaren umbrella for 14 years.

Button said: "The team loses a very fast driver, a guy that's achieved a lot with the team - the last guy to win a world championship for the team.

"It's a big loss but things change and you learn to move on and adapt."

Hamilton has said he hopes he can win races for Mercedes next season, despite their slip in form in the second half of this year.

But Button, who will be partnered by Mexican Sergio Perez at McLaren next year, said he did not know how Hamilton would get on at Mercedes.

"The first year with a new team is always a little bit tricky," Button said. "It's a new experience for Lewis. I'm sure he's excited about it.

"He's as quick as they come but sometimes it's not that easy to win grands prix and to build a team around you and also to help a team achieve great results."

Mercedes started the season strongly but have fallen back dramatically since F1's summer break.

The Brackley-based team have failed to score any points in the three races since Hamilton's deal was announced, but the 27-year-old said he had no regrets about his move.

"It doesn't worry me," he said. "I'm really excited to go there. I feel fantastic about the decision. I'm massively excited about working with new people. It is a fantastic team. I know they have lost their way a little bit at the moment but I'm going to go and help them find their way.

"I already knew how big [the task] was. I really thought about it hard, and I could see how big it was. Perhaps it's growing as a task, but I'm excited about it."

271 comments
Back to top
unknown