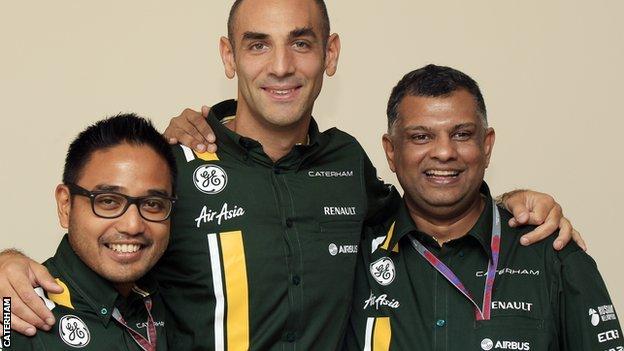 Caterham have appointed the youngest team principal in F1 as the successor to Tony Fernandes.

Frenchman Cyril Abiteboul, 35, was appointed chief executive officer in September and will move up to his new role with immediate effect.

We have big challenges ahead of us but the shareholders are committed and behind us to help us take significant steps forward over the coming years, and one day challenge for the highest honours in F1.

At 35, Abiteboul is younger than four of the current drivers.

Fernandes, the owner of the Air Asia airline, said: "Cyril is going to be an excellent team principal.

"He has extensive experience in F1, he is extremely well respected and he shares our vision for what we want our team to achieve.

"He takes over during a season when we have not yet fulfilled our potential, but at a time when we have everything in place to help us do so. One day we will earn our seat at the top table of Formula 1 and he is the right person to take us there."

Caterham - and before them Lotus Racing - have finished 10th in the constructors' championship for the last three years, a position that has financial rewards worth millions of pounds.

That position is under threat this season - they are 11th, behind Marussia, with two races to go.

If they cannot regain 10th place, they may need to employ in 2013 two drivers who bring sponsorship to the team and drop one-time race-winner Heikki Kovalainen, who currently earns a $2m salary.

Abiteboul said: "We have big challenges ahead of us but the shareholders are committed and behind us to help us take significant steps forward over the coming years, and one day challenge for the highest honours in F1.

"We have an incredible spirit within the team and that has been created by Tony and Kamarudin.

"This spirit, allied to a strategic vision that gives us a clear path to success, is what will keep driving us forwards and we all look forward to the day we can make the dreams our shareholders had several years ago come true."

Abiteboul will report to Fernandes and Caterham Group chief executive officer Riad Asmat, who has been de facto team boss since their debut in 2010 as Lotus Racing.