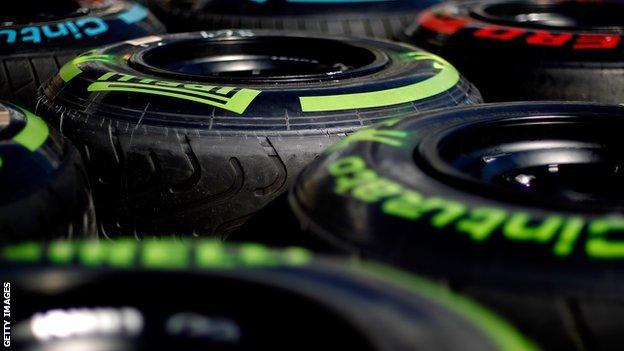 Mastering temperamental tyres is the black art that Formula 1 teams conjure with at every grand prix.

Like those on any road car, the tyres' main job is to provide grip. When the driver hits the brake it is the rubber binding to the asphalt that stops the car.

Despite their simplistic purpose, tyres have now evolved to play a major part in how an F1 race is won or lost.

"Tyres are the least predictable item that we have on the car," Gianluca Pisanello, Caterham F1 team's chief engineer explains.

"But that makes racing more exciting and introduces a challenge in reacting to the changing conditions."

F1's racing tyres are wider than a normal road tyre with a rigid internal structure and a high shoulder.

Race tyres are designed to withstand loads of 5G under braking while road tyres only face forces of 1G.

This perennial challenge was made even harder by a decision by Pirelli, who supply the sport with 50,000 tyres a year, to make tyres less durable when it returned to F1 in 2010.

The idea was to spice up the racing by making their behaviour more unpredictable.

Pirelli's plan has worked but it means tyre strategy and tyre management are now paramount for teams and drivers chasing glory over a race weekend.

But what does this mean exactly for the team strategists on the pit wall and the driver in the cockpit?

In simple terms, tyre strategy is about being on the right tyre at the right time.

Pirelli bring two of these compounds to each race at their discretion and the drivers must run on each tyre during a dry race.

The track characteristics and layout determine which tyre will perform better during the race, and that is the team strategists' first dilemma.

"If you have a very high-speed track with high-speed corners like Silverstone you want the harder tyre as it has less grip," explains Gary Anderson, a former F1 car designer at Jordan, Stewart and Jaguar.

"If you have a low-speed track like Monaco with slower corners you want the softer tyre as it gives more grip at lower speed."

Temperature and weather are then also taken into account. F1 tyres come alive at boiling point (100C) and teams use warm tyre blankets to heat them up to 80C in the garage.

The drivers then nurse them up to the optimum temperature on track - although long straights, track and ambient conditions mean they are still in danger of losing heat.

"These tyres have a relatively narrow operating window compared to others that we've had over the years," says James Allison, technical director of the Lotus F1 team.

"That window is basically keeping the tyre not too hot and not too cold. As people drift in and out of that window [the competitive order] rearranges."

As well as conditions, strategy also involves juggling each driver's tyre allowance over the race weekend.

Each driver is allocated just three hard and three soft sets of tyres for qualifying and the race.

This has even led to some teams controversially sitting out the final phase of qualifying in order to save fresh tyres for the race.

Solving the conundrum of tyre strategy also involves keeping one eye on the tyre behaviour of their rivals.

Teams pore over each other's lap times, set on both high and low fuel runs during practice, to help assess their respective tyre performance and even continue monitoring their rivals during the grand prix itself.

The softness of a tyre depends on the ingredients added to the rubber. The main ingredients are sulphur, carbon and oil. The more oil in a tyre the softer it is.

"You can get some surprises in the race," adds Pisanello. "That's why the strategy engineer and chief engineer look at the complete field to try and understand which tyre is better.

"You analyse the tyre degradation - which is shown by the sequence of lap times they do on one compound or the other - and from there you try to understand am I on the right tyre strategy or do I need to adapt it?"

And making a snap decision - pitting earlier than your rivals, choosing to stay out longer or daring to do one less pit stop - can be the difference between victory or defeat.

While the brains on the pit wall and back in the factories plot strategy the drivers must contend with a more immediate concern in the cockpit - managing their tyres.

"If a driver pushes every lap to the maximum the tyres degrade more quickly," explains Pisanello.

"So we ask the driver to take care of their tyres by applying some driving techniques which will allow the tyres to last longer.

"If there is degradation from the rear tyres, for example, a driver has to be very careful in the corner exit not to be too aggressive applying the throttle because this can generate rear slip and accelerate degradation."

"Forcing the front tyres to keep their trajectory is very stressful for the front tyres so braking or turning in are situations the driver has to be careful with if he wants to take care of those."

Drivers must learn to nurse their tyres, especially when faced with rubber on the edge of its life, an experience double world champion Sebastian Vettel faced in Korea this year when his Red Bull team warned him on the pit-to-car radio: "We will not know when it's too late."

These tyre strategy and management headaches are not likely to be cured in 2013 if Pirelli have their way.

The Italian firm plan to make aggressive changes to the compound and alter the construction of the tyre, which will also affect the car's aerodynamic design.

"One of the biggest aspects of any change of tyre from year to year is not how the rubber will behave on the asphalt but whether the tyre has a physically different shape to the year before," explains Allison.

"Tyres have a very chaotic influence on the aerodynamics of the car so we're all very anxious to find out."

And so, even before the new 2013 season has begun, those temperamental tyres are already holding the Formula 1 field in their thrall.