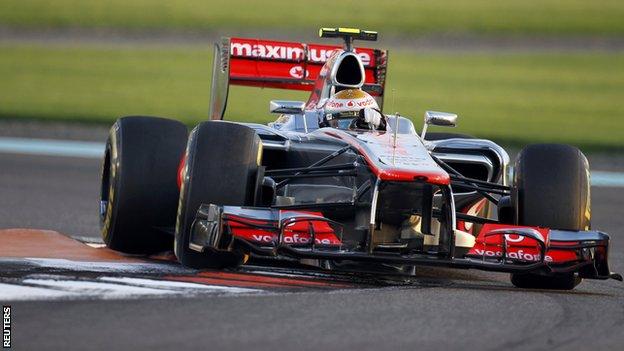 Whitmarsh said he did "not fully understand" the reasons behind Hamilton's decision to join a less competitive team.

"I think he has on occasions [regretted it]," Whitmarsh said.

He said he felt Hamilton's decision was motivated by a desire to "flee the nest" and that he suspected Mercedes offered him more money.

The remarks came in a wide-ranging interview with the official Formula 1 website.

Whitmarsh said he believed wanting to move on from a team Hamilton has been part of since he was 13 was his "prime" motive for leaving McLaren.

"If I were speculating there are a number of factors, and the prime one, I think, is that there comes a time when a man feels he has to flee the nest," Whitmarsh said. "I think it was a bit of that and a range of different emotions. He has been with us for so many years that I do not fully understand it."

He also said he suspected Mercedes had offered Hamilton a bigger salary.

"We made Lewis an offer - an offer, which I believe is more money than any other driver at the moment is being paid," Whitmarsh said.

"That leads us to suspect that our competitor and our partner Mercedes-Benz offered a bit more money. I don't know that, but I think for Lewis made his decision."

Asked about Hamilton's remarks that he is looking forward to the opportunity of building Mercedes into a team that wins regularly, Whitmarsh said: "You have to justify your decision. He is not going to say: 'Hey, they offered me more money.' He is also not going to say that he's made an awful mistake. I hope he thinks today that he's made an awful mistake and I hope he thinks that next year.

"He's made that decision and he has to live with that decision. I have known him since he was 11 and worked with him since his teens and I know we will both be very emotional after Brazil. We have had one or two emotional moments since the decision was taken and I believe, but you must ask him, that we have a very good relationship."

Whitmarsh said he suspected Hamilton and McLaren would both have "very emotional moments" at the final race of the season in Brazil later this month.

Hamilton is believed to have earned about $24m (£15m) including bonuses this year with McLaren.

Sources say McLaren initially offered Hamilton about $20m (£12.5m) plus bonuses for 2013 and upped that to $22m (£13.8m) plus bonuses when they realised Mercedes was a serious possibility for him.

Mercedes have not scored a point in the four races since Hamilton's move was announced.

But at the Abu Dhabi Grand Prix last weekend Hamilton said he had no regrets about the switch.

"I already knew how big [a task] it was," he said. "I really thought about it hard, and I could see how big it was. Perhaps it's growing as a task, but I'm excited about it, to meet the new people and to be in a new environment and mould myself into it.

"It doesn't worry me. I'm really excited to go there. I feel fantastic about the decision - I'm massively excited about working with new people. It is a fantastic team. I know they have lost their way a little bit at the moment, but I'm going to go and help them find their way."