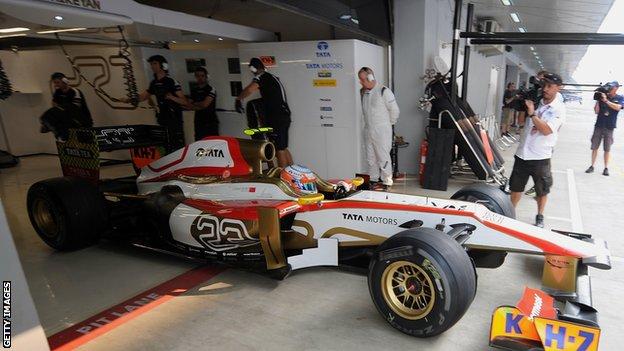 Back-of-the-grid Formula 1 team HRT have been put up for sale by their Spanish owners.

A statement from HRT on Monday said Thesan was "in talks with a number of groups interested in buying the team".

It added that they hoped to conclude a sale "in the coming weeks and with it enable the team to continue progressing and become a reference in modern F1".

Spain's Pedro de la Rosa and India's Narain Karthikeyan are the current drivers for HRT, who made their F1 debut in 2010.

We're convinced that the sporting potential of the team is huge

They are last in the constructors' championship with two races to go this season, and finished 11th out of 12 teams in both 2010 and 2011.

The statement continued: "We're very proud of the work done by the entire team and of the excellent sporting evolution achieved but the time has come for the team to continue growing with new financial backing.

"We're convinced that the sporting potential of the team is huge and that the presence of new investors can give it a big boost."