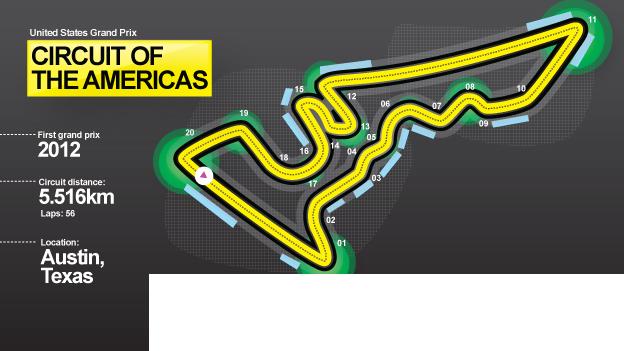 Formula 1 has had a rocky relationship with the USA in its long history - a global single-seater championship that has struggled to fit in alongside the hugely popular national stock car championship, Nascar.

Nine different venues, including Las Vegas, Long Beach and Indianapolis, have all played host to Formula 1, with only Watkins Glen - which hosted the race between 1961 and 1980 - managing to hold on to the event for a long period.

The Indianapolis Motor Speedway offered the sport a way back when the organisers built an infield road course which used a mile of the venue's famous oval.

Early signs were encouraging, when 225,000 fans attended the first race in 2000. But the hard work was undone when the 2005 event saw just six cars start the race because of a tyre row. Though the event was held for two more years, the fans had lost interest and the contract was not renewed.

This weekend, the purpose-built Circuit of the Americas will become the 10th American venue to try to give Formula 1 a permanent home. Early thoughts on the track layout have been positive but an exciting race on Sunday will be needed if the sport is to capture the hearts of the nation.

The new 5.516km 20-turn track looks like it will provide a stern challenge for drivers, with several elevation changes that weave slower, technical sections with fast, sweeping turns.

The hallmark of the circuit is the big differences in circuit elevation within a lap as the highest point is around 40ft higher than the lowest point.

Track designer Hermann Tilke looks to have taken the sections of some of the world's best circuits and fused them together to make one super track.

Turn One shares a likeness with the steep Eau Rouge at Belgium's Spa Francorchamps while Turns Two and Three are similar to the Senna S in Interlagos - which hosts the season finale.

The high-speed sweeping turns of Four, Five and Six are remarkably similar to the Maggotts, Becketts and Chapel complex at Silverstone, while Turns 12-14 echo the stadium section at Germany's Hockenheim. Turns 16 to 18 look a little like Istanbul Park's multi-apex Turn 8.

The best overtaking place looks to be Turn 12, which comes after a long back straight that also houses the DRS activation zone.

Formula 1 first graced the shores of the USA in 1959 at Sebring in Florida and has since visited eight other venues - Riverside, Long Beach, Watkins Glen, Detroit, Dallas, Phoenix, Las Vegas and Indianapolis.

Few will forget the 1981 and 1982 races when the F1 circus ended up in Caesars Palace car park. Things took a step up in class when the Indianapolis Motor Speedway, known as the Brickyard, which hosts the Indy 500 held the event from 2000-07.

Now, America has taken a gamble by building its first purpose-built F1 racing venue on a 1,000-acre site in south east Austin, Texas.

Construction on the £250m project began in 2010 and, despite funding issues, the track - which can hold 120,000 spectators - was ready just under two years later.

Caterham driver Heikki Kovalainen: "I've spent a day in the simulator preparing so I know how the track flows, and they've taken the same approach as we saw in India, adding in up and downhill sections with some really quick corners and a couple of heavy braking zones where it should be possible to pass other cars."

Sauber driver Kamui Kobayashi: "I have never been to Texas. It's cowboy country, so I hope I can see some of them there. I have had a look at Austin on a Google map and it looks nice. I have not seen the circuit on a simulator and, in fact, have no idea what it is like. However, it will be OK and a surprise for me."

Williams's Bruno Senna: "It's always interesting to see how drivers cope with a layout they haven't driven before. The weather can be very varied in Texas as well, with lots of wind and drops in temperature, so that could be a factor."

Red Bull's Mark Webber: "The layout looks awesome. I've been to Austin a few times, I've got some buddies there. It's a really vibrant city, similar to Melbourne, and I know the locals are going to really embrace it."

Lotus's Kimi Raikkonen: "I don't know anything about Austin, just the name Circuit of the Americas. I like the American atmosphere, it's just a relaxed environment; they know how to have fun and, most of all, they love racing."

The US GP highlights

"Formula 1 needs America - or at least that's what the teams, desperate to tap into the world's biggest economy, believe. The problem so far has been that America has not needed F1.

"Through the 1970s and into the early 1980s, the sport seemed to have a home there, first in Watkins Glen in upper New York state and then in Long Beach, California. Both races were popular with the teams and fans, but not so Bernie Ecclestone - they did not pay enough.

"Cue a parade through disinterested Detroit, Dallas and Phoenix and then the fall of the US Grand Prix off the calendar.

"When the famous Indianapolis Speedway built a road course for 2000, that looked like it could be F1's permanent home, but a disastrous event in 2005 when only six cars took part because of tyre problems spelt the beginning of the end, and the contract was not renewed.

"Now Austin, Texas, is the great new hope. The track looks promising, Austin is the sort of young, happening city that F1 wants to seduce. But will it last? Everyone in F1 hopes so."

2005Indianapolis - Ferrari's Michael Schumacher claimed victory in a farcical United States Grand Prix at Indianapolis Motor Speedway as just six cars took part. because of a tyre safety row. Only the Bridgestone-shod cars - Ferrari, Jordan and Minardi - took to the grid while the rest of the field, on Michelin tyres deemed unsafe to race, parked up in their garages. Bottles were thrown onto the circuit during the race as the cars crossed the finished line to shouts of derision from the fans. Ferrari's Rubens Barrichello finished second with Jordan's Tiago Monteiro completing the podium.

1990Phoenix - A young Jean Alesi produced an epic drive in his under-funded Tyrrell at the Phoenix Street Circuit, taking an early lead from McLaren's Ayrton Senna. Several overtakes between the pair followed, with Senna eventually winning out and crossing the line some eight seconds clear or Alesi. Nonetheless, it was a remarkable performance from the Frenchman who scored his first podium finish ahead of the Williams of Thierry Boutsen.

1983Long Beach - McLaren struggled for pace in qualifying, with John Watson and Niki Lauda lining up 22nd and 23rd respectively, but bounced back in style on race day. Patrick Tambay led away from pole before a collision with Keke Rosberg put him out of the race. Jacques Laffite took over the lead but was soon hunted down by the flying McLarens who had pulled off some impressive overtakes to cut through the field. Watson pulled away to take his fifth career win as Lauda came home second, nursing cramp in his right leg, with Rene Arnoux taking third.