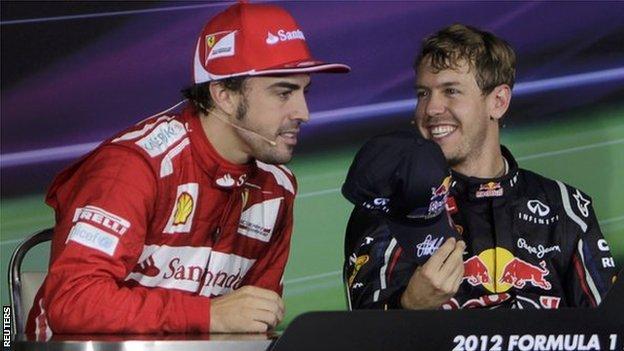 On the surface, Sebastian Vettel and Fernando Alonso seem very different. Alonso is all dark, brooding intensity; charismatic but distant.

Vettel is much sunnier - chatty, long answers, always ready with a joke and, as the Abu Dhabi podium ceremony proved, a salty English phrase.

It is hard to think of a race in which, assuming he got around the first corner, Alonso has not been on world-class form

Underneath, though, they share more than might at first be apparent. Both are highly intelligent, intensely dedicated to their profession, and totally ruthless in their own way.

Equally, although Alonso's wit may be less obvious than Vettel's, it is highly developed, bone dry, effective, and often used to tactical ends.

And they are both, of course, utterly fantastic racing drivers.

These two all-time greats head into the final two races of a marathon and topsy-turvey 2012 Formula 1 season separated by a tiny margin. Ten points is the same as a fifth place - or the margin between finishing first and third.

Vettel, on account of being ahead and having comfortably the faster car, is favourite. But within F1 there is a feeling that Alonso would be the more deserving champion, so well has he performed in a car that is not the best.

But is that a fair and accurate point of view? Let's look at their seasons, and you can make your own judgement.

It seems strange now, in the wake of Red Bull's recent pulverising form, but at the start of this season the world champions were struggling.

The car always had very good race pace - it was right up with the quickest from Melbourne on - but qualifying was a different matter.

In China, Vettel did not make it into the top 10 shoot-out in qualifying; in Monaco he did - just - but then did not run because he didn't feel he had the pace to make it worthwhile.

In both races, though, he was competitive, taking a fifth place in China and fourth in Monaco, where he nearly won.

That was the story of the first two-thirds of Vettel's season. He kept plugging away, delivering the points and keeping himself in contention in the championship.

He took only one win - in Bahrain, from pole - and he should have had another in Valencia, when he was as dominant as he ever was in 2011 only to retire with alternator failure.

Then, when Red Bull finally hit the sweet spot with their car, he delivered four consecutive wins (one of them inherited following Lewis Hamilton's retirement in Singapore), the last three from the front row of the grid, including two pole positions.

And in Abu Dhabi there was an impressive comeback drive to third after being demoted to the back of the grid, albeit with the help of a significant dose of luck.

It is hard to think of a race in which, assuming he got around the first corner, Alonso has not been on world-class form.

In Australia, when Ferrari were really struggling with their car at the start of the season, he fought up from 12th on the grid to finish fifth (including getting up to eighth on the first lap).

His three victories have been among the best all year -in the wet in Malaysia from ninth on the grid; in Valencia from 11th, including some stunning, clinical and brave overtaking manoeuvres; and a superbly controlled defensive drive in Germany, holding off the faster cars of Vettel and Jenson Button for the entire race, by going flat out only where he needed to, lap after lap after lap.

Then, to pick out some other highlights, there was beating the Red Bulls to pole in the wet at both Silverstone and Hockenheim; his rise from 10th on the grid to third in Monza, including a courageous pass on Vettel a couple of laps after being forced on to the grass at nearly 200mph; and splitting the Red Bulls to finish second in India.

Impressive Vettel has been this year, flawless he has not.

In Malaysia, he cost himself a fourth place by sweeping too early across the front of Narain Karthikeyan's HRT while lapping it. There was a hint of frustration and a sense of entitlement about the move - as there was in his post-race comments in which he called Karthikeyan an "idiot".

In Spain, he was penalised for ignoring yellow caution flags.

In Hockenheim he overtook Jenson Button's McLaren off the circuit, earning himself a demotion from second to fifth place, despite the drivers being warned only a month or so before that they could not benefit by going off the track.

In Monza, he earned a drive-through penalty for pushing Alonso on to the grass at nearly 200mph, in presumed retaliation for a similar move the Spaniard had pulled on Vettel in the same place the previous year. Again, this was despite the drivers being warned that they had to leave room for a rival who had any part of his car alongside any part of theirs.

In qualifying in Japan, he got away with blocking Alonso at the chicane, despite Toro Rosso's Jean-Eric Vergne being penalised for doing the same thing to Williams's Bruno Senna earlier in the session.

And in India he appeared to break guidelines about having all four wheels off the track at one of the chicanes on his only top-10 qualifying lap, but kept his time because the only available footage was from outside the car, and showed only the front wheels. So the FIA had to give him the benefit of the doubt.

Er… Has Alonso made any errors at all this year?

While we're analysing Vettel and Alonso, spare a thought for Lewis Hamilton who says he has driven at his absolute best this season. It is hard to disagree

Well, he did cost himself a couple of points in China when he ran off the road attempting to pass Williams's Pastor Maldonado around the outside of Turn Seven - a move that Vettel did pull off against Lotus's Kimi Raikkonen.

He spun in a downpour in second qualifying at Silverstone, just before the session was red-flagged because it was too dangerous.

And some argue that, defending a championship lead, he should not have put himself in the position he did at the start in Japan, where his rear wheel was tagged by Kimi Raikkonen's Lotus on the run to the first corner, putting Alonso out of the race.

The claim is that Alonso had everything to lose and that, while he did nothing wrong, trying to intimidate Raikkonen into backing off, and squeezing him twice, was too big a risk.

The opposing view of that incident is that Raikkonen, who was behind Alonso, had a better view of the situation and should have realised he wasn't going anywhere from where he was and backed off.

Vettel has lost points from two alternator failures, one in Valencia when he was leading and one in Italy when he was running sixth. And third became fourth in Canada when a planned one-stop strategy had to he aborted. That's 36 points lost.

Alonso was taken out twice at the start - once definitely not his fault (Belgium, when Romain Grosjean's flying Lotus narrowly missed his head); and once arguably not (Japan).

He lost a possible win in Monaco because Ferrari didn't realise that if they left him out a bit longer before his pit stop he could have overtaken leader Mark Webber and second-placed Nico Rosberg as well as third-placed Lewis Hamilton.

He should have finished second in Canada and probably won in Silverstone - rather than being fifth and second - but for errant tyre strategies, and he would have been on the front row and finished at least second in Monza had his rear anti-roll bar not failed in qualifying.

While we're analysing Vettel and Alonso, spare a thought for Lewis Hamilton.

The McLaren driver finally lost any mathematical chance of the title after his retirement from the lead in Abu Dhabi. He is 90 points behind Vettel.

Hamilton has said that he has driven at his absolute best this season, and it's hard to disagree - he has not made a single mistake worth the name.

But his year has been a story of operational and technical failures by his team.

At least three wins have been lost (Spain, Singapore and Abu Dhabi), as well as a series of other big points finishes, as detailed by BBC Radio 5 live commentator James Allen in his blog.

Without that misfortune, Hamilton would be right up with Vettel and Alonso, if not ahead of them.

So, if you're thinking about 'deserving' world champions, if such a thing exists, spare a thought for him too.