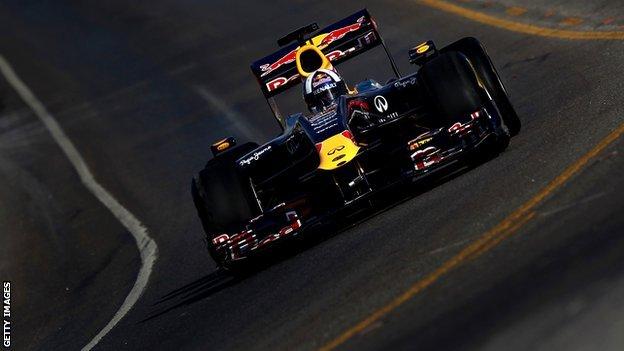 Going to a Grand Prix at a new circuit is always a special challenge for the Formula 1 teams and drivers, so for them this weekend's United States Grand Prix will be one of the most exciting and demanding of the year.

The new Circuit of the Americas in Austin, Texas, looks like it will provide a tough test - so how will the teams go about meeting it?

Before the race weekend

The starting point for a Formula 1 team faced with any new race is to get a detailed map of the circuit from the architects. From this, they will try to establish what sort of set-up the car will need.

"It is always exciting for Formula 1 to go to a new venue, and this weekend's United States Grand Prix in Austin, Texas, is anticipated more than most."

The key information is the radius of each of the corners and the lengths of the straights. From this, one of the engineers will sit down and work out the best 'racing line'. This will take into account two main parameters - the shortest lap distance and minimise the individual corner radius.

You then feed that geometry into a spreadsheet, which is loaded with all the tyre, mechanical and aerodynamic data that makes up the performance window of that car.

Firstly, this programme will use this data to calculate the minimum car speed for each of the corners. Secondly, it will work out braking distances.

Let's say that the minimum corner speed is 100km/h; the programme will accelerate the car backwards away from that corner, working out the braking profile, which can vary dramatically because for a given car speed the aerodynamic forces alter the potential grip levels.

Thirdly, the programme will work out acceleration rates out of the corners. Where the accelerating and braking lines cross gives the maximum speed for the car with that set-up.

So suddenly the team have a graph that shows acceleration speed, braking distance and minimum corner speeds for the whole track. From that, they can sort out the gear ratios and play around with downforce levels.

The more downforce you have on the car, the shorter the braking distance, the higher the mid-corner speed and the slower the acceleration. So a team can try a few downforce levels to see which gives a faster lap time.

All the teams will have at least that basic level of simulation. The bigger teams move on to various, more advanced forms of preparation.

How they stand with two races to go

The likes of McLaren, Red Bull and Ferrari will also have a much more sophisticated satellite-generated three-dimensional map of the track, with all the topography, kerb heights and so on.

They will put all that information into their simulator - a device a little like a home computer game incorporating a mock F1 cockpit in which the driver sits. He can then drive simulated laps of the track, watching a big screen.

Most of these are at the teams' factories. Ferrari's Fernando Alonso even has one at home. That means the driver can begin to understand the track and familiarise himself with the flow of it.

The most sophisticated simulators will also enable the teams to change the mechanical set-up of the car - altering things such as roll distribution front to rear, the front and rear suspension stiffness, downforce levels and so on.

Teams will also have the off-sets for using the Kers power-boost system and the DRS overtaking aid.

As advanced as some of the simulator programmes are, the teams cannot prepare for everything.

There are a couple of things that no simulator can predict - the level of grip in the track and the difference in performance of the two types of tyres that will be available.

Equally, the information about the reality of the track will be imprecise. Is there a bump? Can you hit that kerb? If so, can you get the whole car across it or just two wheels?

These are the sorts of things a driver will not find out until first practice on Friday morning. They will have to go out and experiment on the track and work out how to drive each section.

It's always interesting to see who comes to terms quickest with a new track.

McLaren, for example, have great belief in their simulator. They were one of the first teams to use one, they have spent a lot of money on it and developed it over a number of years so they use it as the initial tool to prepare for a circuit.

From what little I know of the Red Bull one, for example, it is very sophisticated and probably does a substantial amount more than McLaren's.

The big risk at a new track is always over-reacting on a Friday. The circuit will be new, the driver will be learning it. It's a difficult balance between changing the car too much and not changing it enough.

As soon as the driver goes out, he will learn things that were not apparent in the simulator.

Through Austin's fast Esses, for example, he may want to change up early at certain points to keep the torque out of the rear axle and slow down the amount the car accelerates.

Sometimes a driver has to blend the flow of the track a bit - one thing you don't want to be doing with an F1 car is starting and stopping it more frequently than you need to, because that upsets the aerodynamic balance.

Usually on tracks that are not used that much, the teams do very little running in first practice on Friday because they don't want to use up their tyres in dusty conditions. But because Austin is a new track, I would expect all the teams to be out working from the start of practice.

The dustiness is just grip level - it makes the car nervous at the rear coming out of the corners - but that doesn't stop a driver from learning how high the kerbs are and learning the flow of the track.

For the smaller teams who don't have the sophisticated simulation tools, getting out there is vital. For the bigger teams a little less so.

F1 drivers learn tracks remarkably quickly but even so, in this case, a driver probably needs to do an eight-to-10-lap run, experimenting here and there.

He then needs to come in and sit in the car quietly and look at the data from that run, see if there is anything they might do differently, whether it be lines, gears or whatever. That's another 10 minutes. And then go out again.

That's already half an hour taken up out of a 90-minute session, and the driver will need the next hour to get the best out of the car set-up.

So if anyone's sitting in the garage for the first half hour on Friday morning, they're either very confident in their tools or very stupid.