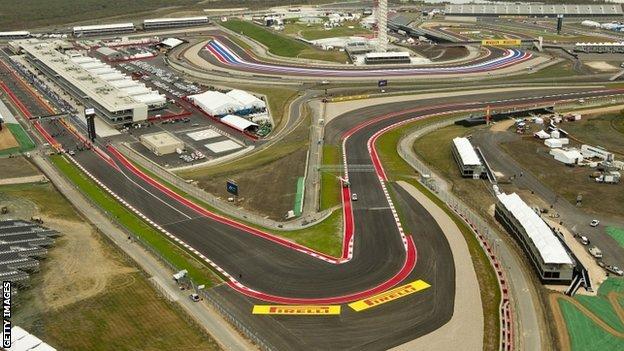 The first thing that strikes you about the new Circuit of Americas in Austin, Texas, is the towering hill on the approach to Turn One.

The steep rise, reminiscent of a ski jump, promises to become a trademark of the new track in which so much hope is invested as Formula 1 attempts yet again to gain a foothold in the American market that has proved so resistant over the years.

Rather as with F1 in America, though, it takes a lot to impress Paul di Resta.

Walking up the incline at the start of his usual walk around the track with his engineers on Thursday, the Scottish Force India driver shrugged and said: "It's just like India."

Di Resta, like everyone in F1, recognises the importance of having a grand prix in America, is pleased to be here and is looking forward to this race.

But he is "not that keen" on the new breed of F1 circuits designed and built by Hermann Tilke, the German who is effectively the sport's in-house architect. Austin is the latest example; India its most recent predecessor.

Di Resta likes Malaysia, the first track Tilke built, and admits to being partial to Korea as well. And as he continued on his exploratory lap of the track on foot he acknowledged that Austin, almost certainly the most important of all, might be one of the better ones.

"It's always nice to go somewhere new," Di Resta says. "You're always a bit reserved until you get out on the track in the car. Having been to India a second year, it's all a bit too much what they've tried to do there. This one is a bit more open; a nicer track to drive."

Like most of his rivals, Di Resta already knows the Circuit of the Americas pretty well having driven many laps of it in his team's simulator - a sort of computer game on steroids.

That takes some of the mystery out of it, but walking the track is still a useful exercise to establish information that the simulator cannot reveal - kerbs, potential alternative lines, safety issues, and so on.

Tilke has deliberately modelled parts of the Circuit of the Americas on 'classic' features of other tracks in F1. So the swerves of Turns Three, Four, Five and Six are the famous Becketts complex at Silverstone; Turns 13, 14 and 15 are meant to be reminiscent of Hockenheim's Stadium section; and the linked right-handers of 16, 17 and 18 are intended to be Turkey's famous Turn Eight in reverse.

But you know what they say about the best-laid plans.

The 'Becketts' section will undoubtedly be enjoyable and fast - McLaren's Jenson Button said it will give the US fans a great idea of an F1 car's mind-blowing high-speed direction changes - but it's obvious as you're walking through that it is more compacted than Becketts.

And Di Resta says that while part of the challenge of Becketts is that the driver is braking while he is turning in some of the high-speed corners, here the braking will probably be done in a straight-line, making the cornering less of a challenge.

Likewise, the 'Hockenheim' section is hardly anything like its German counterpart; and 'Turn Eight in reverse', while still a decent corner, is not really a match for its magnificent predecessor.

Equally, the DRS detection point - where drivers have to be within a second of the car in front to enable them to use the overtaking aid on the long straight - is after a sequence of corners from Turns Seven to 10 which Di Resta and Button feel may make it hard to stay close to another car.

Austin bears the hallmarks of many Tilke tracks - big, asphalt run-off areas; a long, long straight; a high-speed section; a slow-speed section - but it still has an element of uniqueness about it.

Much of the track is lined with red, white and blue paint, reflecting the colours of both the Stars and Stripes and Texas's Lone-Star flag. There is a tall observation tower overlooking the 'Becketts' section, with a transparent floor. And there is a nice touch in allowing RVs - or 'campers' as they are sometimes called - to park alongside the track in some places.

"Normally that wouldn't happen in F1," Di Resta says, "but that's the way Americans like to go racing. That's what they want to do; that's what gets them here."

On this, Di Resta speaks with some authority - his cousin, Dario Franchitti, has made his fortune in US racing as a multiple IndyCar champion and three-time winner of the Indianapolis 500. Married to Hollywood star Ashley Judd, Franchitti will be in Austin from Friday to cheer on Di Resta.

Other aspects of the new track are less successful - the most obvious being the pit building, the architecture of which carries overtones of a high-security prison.

The key question, of course, is whether the race will be the hit everyone in F1 is desperately hoping for it to be.

On that, the first signs are encouraging.

Austin is famed for its Bohemian character. Its catchphrase is "Keep Austin Weird", and in the recent Presidential elections it was an island of support for Barack Obama in solidly Republican Texas. So it is not perhaps the most obvious place to host the overt ostentatiousness and wealth of F1.

But it has embraced the race pretty wholeheartedly. Local news bulletins are heavily focused on Formula 1, and residents are clearly enthusiastic about the "gran pree".

Di Resta, in only in his second season and driving for a midfield team, is not exactly the most recognised face in the sport and is a reserved character, too. But he says that on a shopping trip with his girlfriend on Wednesday he was recognised "quite a lot". "They seem to be quite into it," he says.

Di Resta suspects that the publicity surrounding the Grand Prix of America in New Jersey, recently put on the 2013 calendar and then taken off it, has actually helped raise interest in the new Austin event rather than detract from it.

"That race is such a big thing," he says, "and people have possibly said: 'Well we've got a chance to go to Texas beforehand to see what it's all about.' We were here doing some PR work and people were talking about that one as well as this one."

New Jersey is supposedly going to be on the calendar in 2014, but for now Austin is all F1 has. So if F1 is going to work in America it has to be here.

Texas has provided a purpose-built track, designed to show off the best of F1, and a multi-year contract, in a location with an audience that appears at least intrigued by and receptive to its European visitors.

As Di Resta says: "This will be the true test of whether it will work in the US."