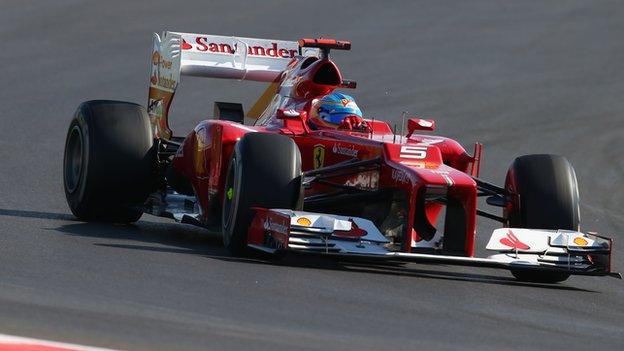 Ferrari's boss says Fernando Alonso faces a tough task to beat Sebastian Vettel to the world title, but believes he can do it.

The Spaniard is 13 points behind defending champion Vettel going into this weekend's final race in Brazil.

Alonso must finish in the top three to give himself a chance of winning the title ahead of the Red Bull driver.

"I know it will be very tough, but I and all of us believe we can do it," said Ferrari boss Luca Di Montezemolo.

Alonso, 31, kept himself in contention going into Interlagos by finishing third in Sunday's United States Grand Prix, one place behind Vettel.

If the two-time World Champion were to win in Brazil he would require Vettel to finish lower than fourth for him to take the title.

Vettel, 25, is looking to become World Champion for the third successive year.

Speaking on the team's official website, Ferrari president Di Montezemolo said: "Now we go to Sao Paolo with the will to win, knowing we will fight for it right to the last kilometre of the last lap of the race."

Pride is not enough - we want to win

After last weekend's race in Austin, Alonso was delighted to still be in with a chance of winning.

Alonso said: "We will go to Brazil with the possibility to fight for the championship, which is something that we have fought for all year, and we have arrived in that fantastic position.

"Only Sebastian is in a better position than us but we should be proud of ourselves so try to enjoy the Brazil race."

This is not the first time that Alonso and Vettel have been in a battle at the top of the Drivers' Championship in the season finale. In 2010 Alonso led the Championship by 15 points going into the final race in Abu Dhabi but was pipped to the title by the German.

Di Montezemolo is not content with just being competitive this time though. "Pride is not enough - we want to win," he said.