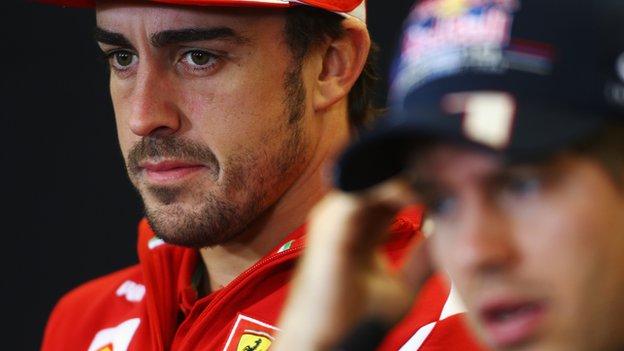 Two of the greatest drivers in Formula 1 history are battling for the honour of becoming a three-time world champion at the Brazilian Grand Prix this weekend.

Whether the victor is Red Bull's Sebastian Vettel, the favourite, or Ferrari's Fernando Alonso, it will be an outstanding achievement.

Either would become the youngest triple champion in history.

Vettel would have achieved his three titles in five full seasons of F1, in 101 races - a success rate comparable with that of Sir Jackie Stewart. The German has racked up 26 career victories.

Alonso, meanwhile, has produced one of the most remarkable seasons in memory. In a year with only one wet race, he has not once had the fastest car in the dry - and usually very far from it - yet he has won three grands prix and finished on the podium a further nine times.

The Spaniard's career win tally stands at 30, fifth in the all-time list. It has come from nearly twice as many races as Vettel, but having spent a far smaller proportion of his career in the best car.

It is no accident this is the second time in three years these two men have been disputing the championship in the final race of the season. Along with Lewis Hamilton, they have operated for a number of years on a separate level beyond the reach of their rivals.

In 2010 in Abu Dhabi, it was Vettel who came out on top against the odds - overturning a 15-point deficit thanks to a dominant victory and a catastrophic strategic error by Ferrari, without which Alonso would have been champion despite having an inferior car.

The Ferrari is still that, but this time the mathematics are almost exactly reversed - Alonso is 13 points behind Vettel going into the race at Sao Paulo's scruffy but atmospheric Interlagos track.

In a car in which he has taken four wins, a second and a third (from a pit-lane start) in the last six races, all Vettel needs to do is finish fourth and the title is his - even if Alonso wins the race, something the Spaniard has not done since the German Grand Prix in July.

The track nestles in a natural amphitheatre and it boils with a claustrophobic atmosphere born of the nearby favelas, the jam-packed, cheering, jeering crowd and the intoxicating, febrile ambience of Brazil itself

On paper, then, it is hard to see how Vettel can lose. But Interlagos is an unpredictable place. It is a venue for the ages, one that has hosted F1 on and off since 1973, and uninterrupted since 1990.

The track nestles in a natural amphitheatre and it boils with a claustrophobic atmosphere born of the nearby favelas - the jam-packed, cheering, jeering crowd and the intoxicating, febrile ambience of Brazil itself.

Even in good weather, odd things can happen, the racing is close and exciting. And quite often the weather is not good. In fact, rain is predicted for this weekend, through Saturday and Sunday. The only question seems to be when it will come.

And rain would change the form book. While the Red Bull is the fastest car in the dry, in the wet the Ferrari is much closer and perhaps its equal. Perhaps the rain disguises the Italian car's shortcomings.

Whatever it is, in two wet qualifying sessions this year, Alonso has been on pole position both times - albeit with the Red Bulls right behind him. And he won the single wet race.

Rain, too, turns the Brazilian Grand Prix into a lottery. In 2003, in a mixed-weather race cut short by a terrifying pair of crashes involving Alonso and Vettel's current team-mate Mark Webber, Giancarlo Fisichella took an unlikely victory in the uncompetitive Jordan.

In 2008, Hamilton needed only to finish fifth in a McLaren to tie up the title, even if his rival Felipe Massa of Ferrari won the race.

Massa duly won at a canter, but Hamilton - he and McLaren hamstrung by a fixation on achieving the bare minimum rather than racing freely in conditions in which he normally excels - started the last lap sixth. Agonisingly close but not close enough.

The Englishman gained fifth place only at the last real corner of the race, and then only because Toyota's Timo Glock, who Hamilton overtook, was struggling for grip having not changed his dry-weather tyres for treaded rain rubber.

A year later, Jenson Button, then at Brawn, qualified only 14th in a damp session, and Vettel, one of his two rivals, was two places behind him in the Red Bull, then as now the best car.

In a dry race, both recovered well to take strong points finishes, and Button did indeed tie up the title, but not before spending some worrying moments the night before.

One could go on and on; the point being that there is nothing easy about achieving even the most modest result at a circuit where the corners come thick and fast, bumps are ever-present and the racing is as action-packed as you will ever see.

Vettel and Alonso, Red Bull and Ferrari, know all this and will be doing their best to treat it as any other weekend. It is, as they keep reminding us, only one of 20 races, and they all count.

"We've just got to approach the next race as we have the previous 19," says Red Bull team principal Christian Horner. "Get the best out of ourselves, the car, the drivers, strategy, reliability. It's good to be going there with a lead and we go there determined to try to close the job off. There may be different weather there; hopefully we can have a strong weekend."

"Pragmatically speaking," says Stefano Domenicali, Horner's opposite number at Ferrari, "we know the result has to be better. We have to be in front of Sebastian and we have to have some drivers in the middle.

"We know it is not easy. He drives very well; he has a very quick car. But it doesn't change what we have to do. We focus on our job and see what will be the outcome of the race."

All very sensible. But Interlagos has a tendency to throw the cards up in the air, and they do not always come down as you might expect.

All things being equal, it should be Vettel - but there could yet be a sting in the tail.