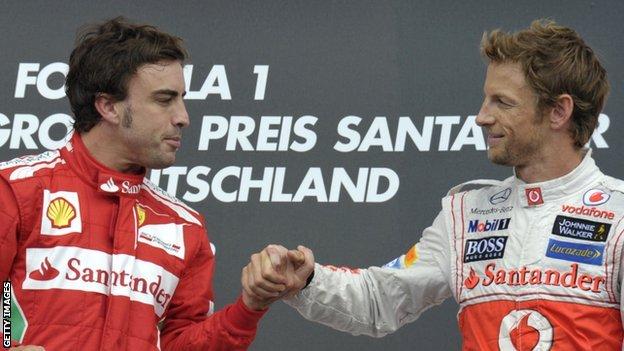 McLaren's Jenson Button said he would rather Ferrari's Fernando Alonso won the title this year than his rival Sebastian Vettel of Red Bull.

Vettel goes into the final race of the season in Brazil this weekend as favourite, 13 points clear of Alonso.

I said after the first race I don't think [Alonso]'s got a chance, but he's done a great job

Asked if he was bothered who won, Button said: "Fernando has been the most consistent this year.

"We all know how important that is, so probably Fernando. Just because he hasn't really made any mistakes."

Alonso's Ferrari started the season 1.5 seconds off the pace. It has improved since then but has never been the quickest car in the dry, yet the Spaniard, a two-time champion, has produced what he himself says is his best season to stay in contention throughout the year.

Button said: "I said after the first race I don't think he's got a chance, and I didn't think he did. He was a second off in qualifying, or even more. [Ferrari] have done a good job and he's obviously done a great job as well.

"He's been consistently quick and done a very good job in the car he has.

"Seb has been more inconsistent. The last few races he has been fantastic, with a great car.

"If you look at the season as a whole, consistency really does mean a lot and it's good to see that Fernando has been that good at every race.

"Very impressive, actually, to see that performance at every race."