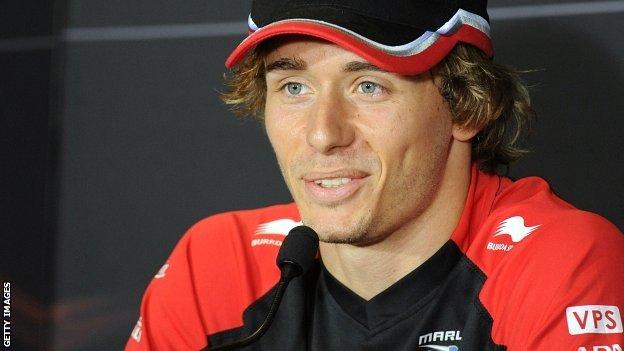 Marussia driver Charles Pic will switch to his team's back-of-the-grid rivals Caterham in 2013.

The 22-year-old Frenchman, who has impressed in his rookie season, has moved despite Marussia being ahead of Caterham in the championship.

Marussia occupy 10th place in the constructors' championship by virtue of Timo Glock's 12th place at the Singapore Grand Prix in September.

The identity of Pic's 2013 Caterham team-mate is not yet known.

Finn Heikki Kovalainen, who has led the team since their debut as Lotus Racing in 2010, is hoping to stay on.

But his only chance is believed to be if the team can manage to overhaul Marussia at the final race of the season in Brazil this weekend and finish ahead of them in the championship.

If Caterham finish the season in 11th place, it is believed they will have to take a second driver who brings sponsorship alongside Pic, who brings a budget and has a close relationship with engine supplier Renault.

"I am very proud to be able to confirm that I am joining Caterham F1 Team next year," said Pic. "I'm enthusiastic to have the opportunity to continue to grow in a team that has a technical relationship with a number of French global companies.

"I am very excited about starting my second year in F1 with a team that has so much potential. Caterham F1 Team has everything in place to help it move into a position to fight with a number of teams ahead. I know how determined the team is to keep progressing and I am looking forward to playing my part in helping them move up the grid."

Russian Vitaly Petrov, Kovalainen's team-mate this year, is also a candidate if he can raise sufficient sponsorship.

German Timo Glock will stay on at Marussia for a fourth consecutive season and Englishman Max Chilton is tipped to be his team-mate.