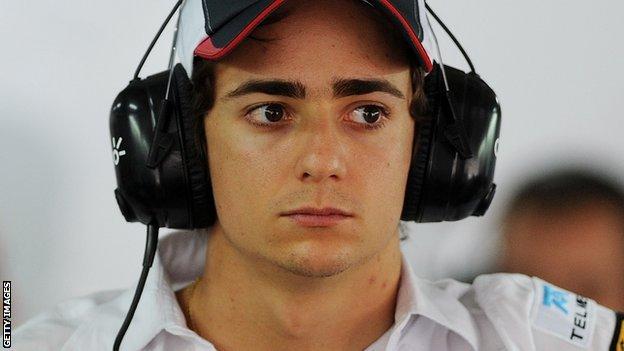 The 21-year-old replaces countryman Sergio Perez, who is leaving the team to join McLaren next year. Gutierrez will partner German Nico Hulkenberg.

He owes his place at least partly to the team's Mexican sponsor, the communications giant Telmex.

"Generally, to take a decision on a driver is a strategic decision," Kaltenborn told BBC Sport.

"You have to look at the whole picture which for us definitely includes the quality of the driver; we did the same with Sergio for example.

"We had many options at that time as well and we went for Sergio because we were first of all convinced he was a very talented driver.

"You have to look at many aspects and we are open about that."

Frijns, who is only two days younger than Gutierrez, does not have rich backers and has won his place as reserve driver on merit after impressing the team at the Abu Dhabi young driver test earlier this month.

"This was the reason we gave him the chance to drive the Sauber C31-Ferrari at the young driver days in Abu Dhabi. He managed this very well.

"We will now carefully guide him to Formula 1. This is a long way, but Robin has got the skills to do that successfully."

Frijns said he was "very happy" to "get the chance to learn how Formula 1 works in an extremely professional environment".

He added: "I am already very much looking forward to getting the 2013 season started and working together with the team."

Sauber's decision leaves Japanese driver Kamui Kobayashi, who has raced for the team since 2009, looking for a drive next year. His chances of finding one appear slim.